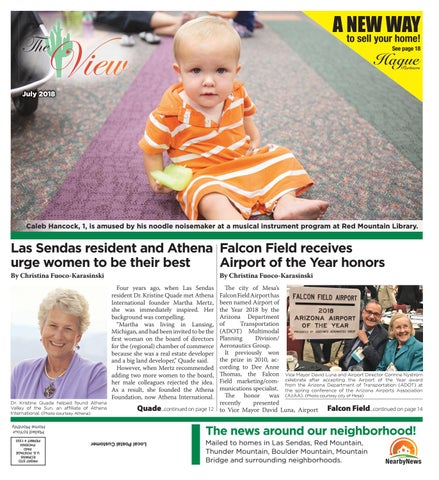 A NEW WAY to sell your home! See page 18

Caleb Hancock, 1, is amused by his noodle noisemaker at a musical instrument program at Red Mountain Library.

By Christina Fuoco-Karasinski Four years ago, when Las Sendas resident Dr. Kristine Quade met Athena International founder Martha Mertz, she was immediately inspired. Her background was compelling. “Martha was living in Lansing, Michigan, and had been invited to be the first woman on the board of directors for the (regional) chamber of commerce because she was a real estate developer and a big land developer,” Quade said. However, when Mertz recommended adding two more women to the board, her male colleagues rejected the idea. As a result, she founded the Athena Foundation, now Athena International.

The city of Mesa’s Falcon Field Airport has been named Airport of the Year 2018 by the Arizona Department of Transportation (ADOT) Multimodal Planning Division/ Aeronautics Group. It previously won the prize in 2010, according to Dee Anne Thomas, the Falcon Vice Mayor David Luna and Airport Director Corinne Nystrom Field marketing/com- celebrate after accepting the Airport of the Year award from the Arizona Department of Transportation (ADOT) at munications specialist. the spring conference of the Arizona Airports Association The honor was (AzAA). (Photo courtesy city of Mesa) recently presented Quade...continued on page 12 to Vice Mayor David Luna, Airport Falcon Field...continued on page 14