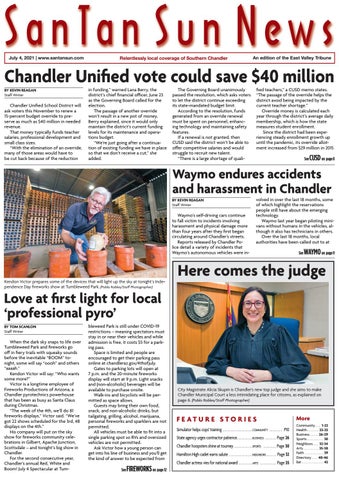 Chandler Unified School District will ask voters this November to renew a 15-percent budget override to preserve as much as $40 million in needed revenue. That money typically funds teacher salaries, professional development and small class sizes. “With the elimination of an override, many of those areas would have to be cut back because of the reduction

in funding,” warned Lana Berry, the district’s chief financial officer, June 23 as the Governing Board called for the election. The passage of another override won’t result in a new pot of money, Berry explained, since it would only maintain the district’s current funding levels for its maintenance and operations budget. “We’re just going after a continuation of existing funding we have in place so that we don’t receive a cut,” she added.

The Governing Board unanimously passed the resolution, which asks voters to let the district continue exceeding its state-mandated budget limit. According to the resolution, funds generated from an override renewal must be spent on personnel, enhancing technology and maintaining safety features. If a renewal is not granted, then CUSD said the district won’t be able to offer competitive salaries and would struggle to recruit new talent. “There is a large shortage of quali-

fied teachers,” a CUSD memo states. “The passage of the override helps the district avoid being impacted by the current teacher shortage.” Override money is calculated each year through the district’s average daily membership, which is how the state measures student enrollment. Since the district had been experiencing steady enrollment growth up until the pandemic, its override allotment increased from $29 million in 2015 See

Waymo’s self-driving cars continue to fall victim to incidents involving harassment and physical damage more than four years after they first began circulating around Chandler’s streets. Reports released by Chandler Police detail a variety of incidents that Waymo’s autonomous vehicles were in-

Kendon Victor prepares some of the devices that will light up the sky at tonight’s Independence Day fireworks show at Tumbleweed Park. (Pablo Robles/Staff Photographer)

volved in over the last 18 months, some of which highlight the reservations people still have about the emerging technology. Waymo last year began piloting minivans without humans in the vehicles, although it also has technicians in others. Over the last 18 months, local authorities have been called out to at See

When the dark sky snaps to life over Tumbleweed Park and fireworks go off in fiery trails with squeaky sounds before the inevitable “BOOM” tonight, some will say “oooh” and others “aaaah.” Kendon Victor will say: “Who wants some more?” Victor is a longtime employee of Fireworks Productions of Arizona, a Chandler pyrotechnics powerhouse that has been as busy as Santa Claus during Christmas. “The week of the 4th, we’ll do 81 fireworks displays,” Victor said. “We’ve got 22 shows scheduled for the 3rd, 48 displays on the 4th.” His company will put on the sky show for fireworks community celebrations in Gilbert, Apache Junction, Scottsdale – and tonight’s big show in Chandler. For the second consecutive year, Chandler’s annual Red, White and Boom! July 4 Spectacular at Tum-

bleweed Park is still under COVID-19 restrictions – meaning spectators must stay in or near their vehicles and while admission is free, it costs $5 for a parking pass. Space is limited and people are encouraged to get their parking pass online at chandleraz.gov/4thofjuly. Gates to parking lots will open at 7 p.m. and the 20-minute fireworks display will start at 9 p.m. Light snacks and (non-alcoholic) beverages will be available to purchase onsite. Walk-ins and bicyclists will be permitted as space allows. Guests may bring their own food, snack, and non-alcoholic drinks, but tailgating, grilling, alcohol, marijuana, personal fireworks and sparklers are not permitted. All vehicles must be able to fit into a single parking spot so RVs and oversized vehicles are not permitted. Ask Victor how a young person can get into his line of business and you’ll get the kind of answer to be expected from See