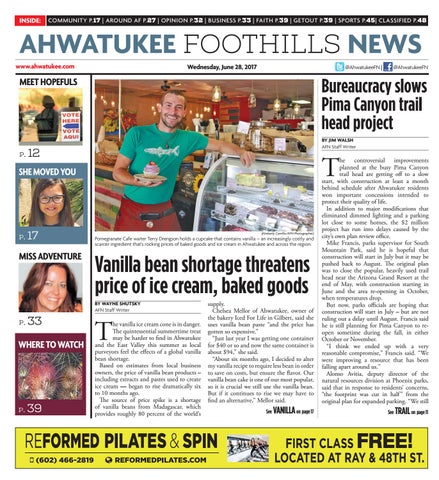 he controversial improvements planned at the busy Pima Canyon trail head are getting off to a slow start, with construction at least a month behind schedule after Ahwatukee residents won important concessions intended to protect their quality of life. In addition to major modifications that eliminated dimmed lighting and a parking lot close to some homes, the $2 million project has run into delays caused by the city’s own plan review office. Mike Francis, parks supervisor for South Mountain Park, said he is hopeful that construction will start in July but it may be pushed back to August. The original plan was to close the popular, heavily used trail head near the Arizona Grand Resort at the end of May, with construction starting in June and the area re-opening in October, when temperatures drop. But now, parks officials are hoping that construction will start in July – but are not ruling out a delay until August. Francis said he is still planning for Pima Canyon to reopen sometime during the fall, in either October or November. “I think we ended up with a very reasonable compromise,’’ Francis said. “We were improving a resource that has been falling apart around us.’’ Alonso Avitia, deputy director of the natural resources division at Phoenix parks, said that in response to residents’ concerns, “the footprint was cut in half ’’ from the original plan for expanded parking. “We still

AHWATUKEE FOOTHILLS NEWS SHE MOVED YOU

Pomegranate Cafe waiter Terry Drengson holds a cupcake that contains vanilla – an increasingly costly and scarcer ingredient that’s rocking prices of baked goods and ice cream in Ahwatukee and across the region.

he vanilla ice cream cone is in danger. The quintessential summertime treat may be harder to find in Ahwatukee and the East Valley this summer as local purveyors feel the effects of a global vanilla bean shortage. Based on estimates from local business owners, the price of vanilla bean products – including extracts and pastes used to create ice cream — began to rise dramatically six to 10 months ago. The source of price spike is a shortage of vanilla beans from Madagascar, which provides roughly 80 percent of the world’s

supply. Chelsea Mellor of Ahwatukee, owner of the bakery Iced For Life in Gilbert, said she uses vanilla bean paste “and the price has gotten so expensive.” “Just last year I was getting one container for $40 or so and now the same container is about $94,” she said. “About six months ago, I decided to alter my vanilla recipe to require less bean in order to save on costs, but ensure the flavor. Our vanilla bean cake is one of our most popular, so it is crucial we still use the vanilla bean. But if it continues to rise we may have to find an alternative,” Mellor said. See