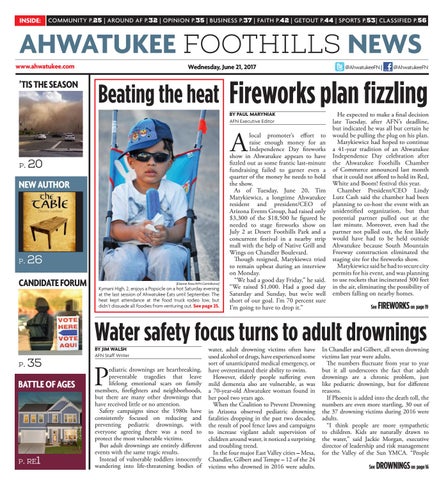 local promoter’s effort to raise enough money for an Independence Day fireworks show in Ahwatukee appears to have fizzled out as some frantic last-minute fundraising failed to garner even a quarter of the money he needs to hold the show. As of Tuesday, June 20, Tim Matykiewicz, a longtime Ahwatukee resident and president/CEO of Arizona Events Group, had raised only $3,300 of the $18,500 he figured he needed to stage fireworks show on July 2 at Desert Foothills Park and a concurrent festival in a nearby strip mall with the help of Native Grill and Wings on Chandler Boulevard. Though resigned, Matykiewcz tried to remain upbeat during an interview on Monday. “We had a good day Friday,” he said. “We raised $1,000. Had a good day Saturday and Sunday, but we’re well short of our goal. I’m 70 percent sure I’m going to have to drop it.”

He expected to make a final decision late Tuesday, after AFN’s deadline, but indicated he was all but certain he would be pulling the plug on his plan. Matykiewicz had hoped to continue a 41-year tradition of an Ahwatukee Independence Day celebration after the Ahwatukee Foothills Chamber of Commerce announced last month that it could not afford to hold its Red, White and Boom! festival this year. Chamber President/CEO Lindy Lutz Cash said the chamber had been planning to co-host the event with an unidentified organization, but that potential partner pulled out at the last minute. Moreover, even had the partner not pulled out, the fest likely would have had to be held outside Ahwatukee because South Mountain Freeway construction eliminated the staging site for the fireworks show. Matykiewicz said he had to secure city permits for his event, and was planning to use rockets that incinerated 300 feet in the air, eliminating the possibility of embers falling on nearby homes.

Kymani High, 2, enjoys a Popsicle on a hot Saturday evening at the last session of Ahwatukee Eats until September. The heat kept attendance at the food truck rodeo low, but didn’t dissuade all foodies from venturing out. See page 25.

ediatric drownings are heartbreaking, preventable tragedies that leave lifelong emotional scars on family members, firefighters and neighborhoods, but there are many other drownings that have received little or no attention. Safety campaigns since the 1980s have consistently focused on reducing and preventing pediatric drownings, with everyone agreeing there was a need to protect the most vulnerable victims. But adult drownings are entirely different events with the same tragic results. Instead of vulnerable toddlers innocently wandering into life-threatening bodies of

water, adult drowning victims often have used alcohol or drugs, have experienced some sort of unanticipated medical emergency, or have overestimated their ability to swim. However, elderly people suffering even mild dementia also are vulnerable, as was a 70-year-old Ahwatukee woman found in her pool two years ago. When the Coalition to Prevent Drowning in Arizona observed pediatric drowning fatalities dropping in the past two decades, the result of pool fence laws and campaigns to increase vigilant adult supervision of children around water, it noticed a surprising and troubling trend. In the four major East Valley cities – Mesa, Chandler, Gilbert and Tempe – 12 of the 24 victims who drowned in 2016 were adults.

In Chandler and Gilbert, all seven drowning victims last year were adults. The numbers fluctuate from year to year but it all underscores the fact that adult drownings are a chronic problem, just like pediatric drownings, but for different reasons. If Phoenix is added into the death toll, the numbers are even more startling, 30 out of the 37 drowning victims during 2016 were adults. “I think people are more sympathetic to children. Kids are naturally drawn to the water,” said Jackie Morgan, executive director of leadership and risk management for the Valley of the Sun YMCA. “People See