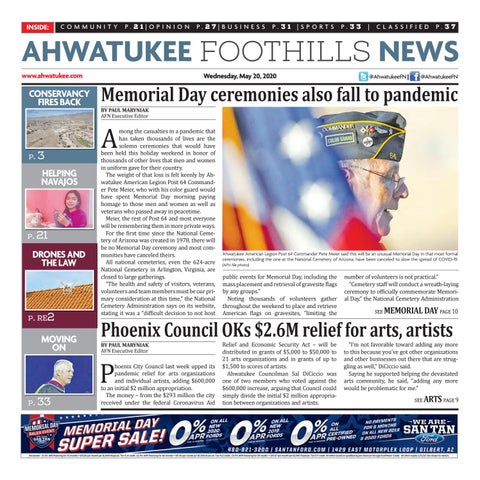 DRONES AND THE LAW

mong the casualties in a pandemic that has taken thousands of lives are the solemn ceremonies that would have been held this holiday weekend in honor of thousands of other lives that men and women in uniform gave for their country. The weight of that loss is felt keenly by Ahwatukee American Legion Post 64 Commander Pete Meier, who with his color guard would have spent Memorial Day morning paying homage to those men and women as well as veterans who passed away in peacetime. Meier, the rest of Post 64 and most everyone will be remembering them in more private ways. For the first time since the National Cemetery of Arizona was created in 1978, there will be no Memorial Day ceremony and most communities have canceled theirs. All national cemeteries, even the 624-acre National Cemetery in Arlington, Virginia, are closed to large gatherings. “The health and safety of visitors, veterans, volunteers and team members must be our primary consideration at this time,” the National Cemetery Administration says on its website, stating it was a “difficult decision to not host

Ahwatukee American Legion Post 64 Commander Pete Meier said this will be an unusual Memorial Day in that most formal ceremonies, including the one at the National Cemetery of Arizona, have been canceled to slow the spread of COVID-19. (AFN ﬁle photo)

public events for Memorial Day, including the mass placement and retrieval of gravesite flags by any groups.” Noting thousands of volunteers gather throughout the weekend to place and retrieve American flags on gravesites, “limiting the

number of volunteers is not practical.” “Cemetery staff will conduct a wreath-laying ceremony to officially commemorate Memorial Day,” the National Cemetery Administration

Relief and Economic Security Act – will be distributed in grants of $5,000 to $50,000 to 21 arts organizations and in grants of up to $1,500 to scores of artists. Ahwatukee Councilman Sal DiCiccio was one of two members who voted against the $600,000 increase, arguing that Council could simply divide the initial $2 million appropriation between organizations and artists.

“I’m not favorable toward adding any more to this because you’ve got other organizations and other businesses out there that are struggling as well,” DiCiccio said. Saying he supported helping the devastated arts community, he said, “adding any more would be problematic for me.”

hoenix City Council last week upped its pandemic relief for arts organizations and individual artists, adding $600,000 to an initial $2 million appropriation. The money – from the $293 million the city received under the federal Coronavirus Aid