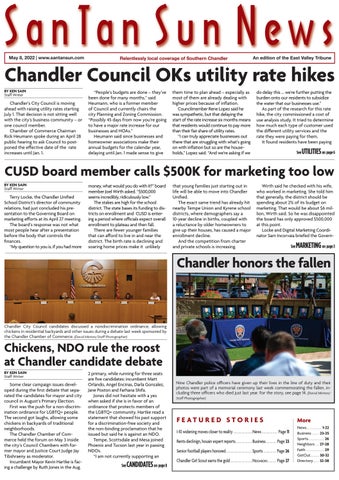 Chandler’s City Council is moving ahead with raising utility rates starting July 1. That decision is not sitting well with the city’s business community – or one council member. Chamber of Commerce Chairman Rick Heumann spoke during an April 28 public hearing to ask Council to postponed the effective date of the rate increases until Jan. 1.

“People’s budgets are done – they’ve been done for many months,” said Heumann, who is a former member of Council and currently chairs the city Planning and Zoning Commission. “Possibly 45 days from now you’re going to have a major rate increase for our businesses and HOAs.” Heumann said since businesses and homeowner associations make their annual budgets for the calendar year, delaying until Jan. 1 made sense to give

them time to plan ahead – especially as most of them are already dealing with higher prices because of inflation. Councilmember Rene Lopez said he was sympathetic, but that delaying the start of the rate increase six months means that residents would continue to pay more than their fair share of utility rates. “I can truly appreciate businesses out there that are struggling with what’s going on with inflation but so are the households,” Lopez said. “And we’re asking if we

do delay this … we&#39;re further putting the burden onto our residents to subsidize the water that our businesses use.” As part of the research for this rate hike, the city commissioned a cost of use analysis study. It tried to determine how much each type of customer used the different utility services and the rate they were paying for them. It found residents have been paying See

Terry Locke, the Chandler Unified School District’s director of community relations, had just concluded his presentation to the Governing Board on marketing efforts at its April 27 meeting. The board’s response was not what most people hear after a presentation before the body that controls the finances. “My question to you is, if you had more

money, what would you do with it?” board member Joel Wirth asked. “$500,000 seems incredibly, ridiculously low.” The stakes are high for the school district. The state bases its funding to districts on enrollment and CUSD is entering a period where officials expect overall enrollment to plateau and then fall. There are fewer younger families that can afford to live in and near the district. The birth rate is declining and soaring home prices make it unlikely

that young families just starting out in life will be able to move into Chandler Unified. The exact same trend has already hit nearby Tempe Union and Kyrene school districts, where demographers say a 10-year decline in births, coupled with a reluctance by older homeowners to give up their houses, has caused a major enrollment decline. And the competition from charter and private schools is increasing.

Wirth said he checked with his wife, who worked in marketing. She told him that generally, the district should be spending about 2% of its budget on marketing. That would be about $6 million, Wirth said. So he was disappointed the board has only approved $500,000 at this point. Locke and Digital Marketing Coordinator Sam Incorvaia briefed the GovernSee

Some clear campaign issues developed during the first debate that separated the candidates for mayor and city council in August’s Primary Election. First was the push for a non-discrimination ordinance for LGBTQ+ people. The second got laughs, allowing some chickens in backyards of traditional neighborhoods. The Chandler Chamber of Commerce held the forum on May 3 inside the city’s Council Chambers with former mayor and Justice Court Judge Jay Tibshraeny as moderator. Incumbent Mayor Kevin Hartke is facing a challenge by Ruth Jones in the Aug.

2 primary, while running for three seats are five candidates: incumbent Matt Orlando, Angel Encinas, Darla Gonzalez, Jane Poston and Farhana Shifa. Jones did not hesitate with a yes when asked if she is in favor of an ordinance that protects members of the LGBTQ+ community. Hartke read a statement that showed his past support for a discrimination-free society and the non-binding proclamation that he issued but said he is against an NDO. Tempe, Scottsdale and Mesa joined Phoenix and Tucson last year in passing NDOs. “I am not currently supporting an See

Nine Chandler police officers have given up their lives in the line of duty and their photos were part of a memorial ceremony last week commemorating the fallen, including three officers who died just last year. For the story, see page 14. (David Minton/ Staff Photographer)