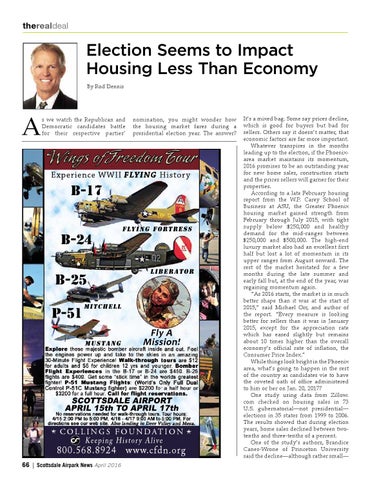 nomination, you might wonder how the housing market fares during a presidential election year. The answer?

It’s a mixed bag. Some say prices decline, which is good for buyers but bad for sellers. Others say it doesn’t matter, that economic factors are far more important. Whatever transpires in the months leading up to the election, if the Phoenixarea market maintains its momentum, 2016 promises to be an outstanding year for new home sales, construction starts and the prices sellers will garner for their properties. According to a late February housing report from the W.P. Carey School of Business at ASU, the Greater Phoenix housing market gained strength from February through July 2015, with tight supply below $250,000 and healthy demand for the mid-ranges between $250,000 and $500,000. The high-end luxury market also had an excellent first half but lost a lot of momentum in its upper ranges from August onward. The rest of the market hesitated for a few months during the late summer and early fall but, at the end of the year, was regaining momentum again. “As 2016 starts, the market is in much better shape than it was at the start of 2015,” said Michael Orr, and author of the report. “Every measure is looking better for sellers than it was in January 2015, except for the appreciation rate which has eased slightly but remains about 10 times higher than the overall economy’s official rate of inflation, the Consumer Price Index.” While things look bright in the Phoenix area, what’s going to happen in the rest of the country as candidates vie to have the coveted oath of office administered to him or her on Jan. 20, 2017? One study using data from Zillow. com checked on housing sales in 73 U.S. gubernatorial—not presidential— elections in 35 states from 1999 to 2006. The results showed that during election years, home sales declined between twotenths and three-tenths of a percent. One of the study’s authors, Brandice Canes-Wrone of Princeton University said the decline—although rather small—