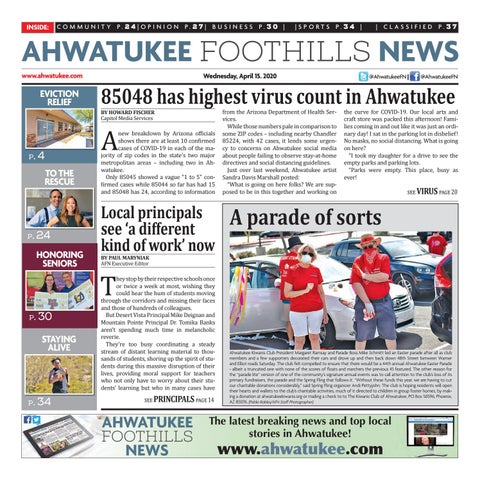 new breakdown by Arizona officials shows there are at least 10 confirmed cases of COVID-19 in each of the majority of zip codes in the state’s two major metropolitan areas – including two in Ahwatukee. Only 85045 showed a vague “1 to 5” confirmed cases while 85044 so far has had 15 and 85048 has 24, according to information

from the Arizona Department of Health Services. While those numbers pale in comparison to some ZIP codes – including nearby Chandler 85224, with 42 cases, it lends some urgency to concerns on Ahwatukee social media about people failing to observe stay-at-home directives and social distancing guidelines. Just over last weekend, Ahwatukee artist Sandra Davis Marshall posted: “What is going on here folks? We are supposed to be in this together and working on

the curve for COVID-19. Our local arts and craft store was packed this afternoon! Families coming in and out like it was just an ordinary day! I sat in the parking lot in disbelief! No masks, no social distancing. What is going on here? “I took my daughter for a drive to see the empty parks and parking lots. “Parks were empty. This place, busy as ever!

A parade of sorts

hey stop by their respective schools once or twice a week at most, wishing they could hear the hum of students moving through the corridors and missing their faces and those of hundreds of colleagues. But Desert Vista Principal Mike Deignan and Mountain Pointe Principal Dr. Tomika Banks aren’t spending much time in melancholic reverie. They’re too busy coordinating a steady stream of distant learning material to thousands of students, shoring up the spirit of students during this massive disruption of their lives, providing moral support for teachers who not only have to worry about their students’ learning but who in many cases have

Ahwatukee Kiwanis Club President Margaret Ramsay and Parade Boss Mike Schmitt led an Easter parade after all as club members and a few supporters decorated their cars and drove up and then back down 48th Street between Warner and Elliot roads Saturday. The club felt compelled to ensure that there would be a 44th annual Ahwatukee Easter Parade - albeit a truncated one with none of the scores of floats and marchers the previous 43 featured. The other reason for the “parade lite” version of one of the community’s signature annual events was to call attention to the club’s loss of its primary fundraisers, the parade and the Spring Fling that follows it. “Without these funds this year, we are having to cut our charitable donations considerably,” said Spring Fling organizer Andi Pettyjohn. The club is hoping residents will open their hearts and wallets to the club’s charitable activities, much of it directed to children in group foster homes, by making a donation at ahwatukeekiwanis.org or mailing a check to to The Kiwanis Club of Ahwatukee, PO Box 50596, Phoenix, AZ 85076. (Pablo Robles/AFN Staff Photographer)

The latest breaking news and top local stories in Ahwatukee!