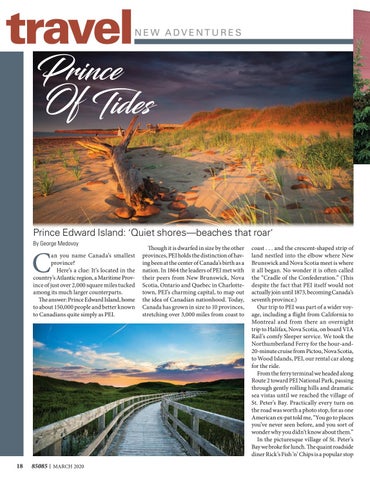 an you name Canada’s smallest province? Here’s a clue: It’s located in the country’s Atlantic region, a Maritime Province of just over 2,000 square miles tucked among its much larger counterparts. The answer: Prince Edward Island, home to about 150,000 people and better known to Canadians quite simply as PEI.

Though it is dwarfed in size by the other provinces, PEI holds the distinction of having been at the center of Canada’s birth as a nation. In 1864 the leaders of PEI met with their peers from New Brunswick, Nova Scotia, Ontario and Quebec in Charlottetown, PEI’s charming capital, to map out the idea of Canadian nationhood. Today, Canada has grown in size to 10 provinces, stretching over 3,000 miles from coast to

coast . . . and the crescent-shaped strip of land nestled into the elbow where New Brunswick and Nova Scotia meet is where it all began. No wonder it is often called the “Cradle of the Confederation.” (This despite the fact that PEI itself would not actually join until 1873, becoming Canada’s seventh province.) Our trip to PEI was part of a wider voyage, including a flight from California to Montreal and from there an overnight trip to Halifax, Nova Scotia, on board VIA Rail’s comfy Sleeper service. We took the Northumberland Ferry for the hour-and20-minute cruise from Pictou, Nova Scotia, to Wood Islands, PEI, our rental car along for the ride. From the ferry terminal we headed along Route 2 toward PEI National Park, passing through gently rolling hills and dramatic sea vistas until we reached the village of St. Peter’s Bay. Practically every turn on the road was worth a photo stop, for as one American ex-pat told me, “You go to places you’ve never seen before, and you sort of wonder why you didn’t know about them.” In the picturesque village of St. Peter’s Bay we broke for lunch. The quaint roadside diner Rick’s Fish ’n’ Chips is a popular stop