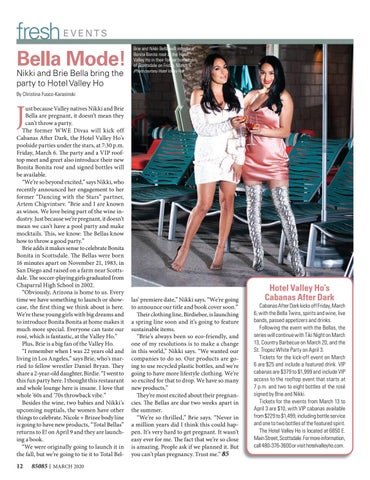 ust because Valley natives Nikki and Brie Bella are pregnant, it doesn’t mean they can’t throw a party. The former WWE Divas will kick off Cabanas After Dark, the Hotel Valley Ho’s poolside parties under the stars, at 7:30 p.m. Friday, March 6. The party and a VIP rooftop meet and greet also introduce their new Bonita Bonita rosé and signed bottles will be available. “We’re so beyond excited,” says Nikki, who recently announced her engagement to her former “Dancing with the Stars” partner, Artem Chigvintsev. “Brie and I are known as winos. We love being part of the wine industry. Just because we’re pregnant, it doesn’t mean we can’t have a pool party and make mocktails. This, we know: The Bellas know how to throw a good party.” Brie adds it makes sense to celebrate Bonita Bonita in Scottsdale. The Bellas were born 16 minutes apart on November 21, 1983, in San Diego and raised on a farm near Scottsdale. The soccer-playing girls graduated from Chaparral High School in 2002. “Obviously, Arizona is home to us. Every time we have something to launch or showcase, the first thing we think about is here. We’re these young girls with big dreams and to introduce Bonita Bonita at home makes it much more special. Everyone can taste our rosé, which is fantastic, at the Valley Ho.” Plus, Brie is a big fan of the Valley Ho. “I remember when I was 22 years old and living in Los Angeles,” says Brie, who’s married to fellow wrestler Daniel Bryan. They share a 2-year-old daughter, Birdie. “I went to this fun party here. I thought this restaurant and whole lounge here is insane. I love that whole ’60s and ’70s throwback vibe.” Besides the wine, two babies and Nikki’s upcoming nuptials, the women have other things to celebrate. Nicole + Brizee body line is going to have new products, “Total Bellas” returns to E! on April 9 and they are launching a book. “We were originally going to launch it in the fall, but we’re going to tie it to Total Bel-

las’ premiere date,” Nikki says. “We’re going to announce our title and book cover soon.” Their clothing line, Birdiebee, is launching a spring line soon and it’s going to feature sustainable items. “Brie’s always been so eco-friendly, and one of my resolutions is to make a change in this world,” Nikki says. “We wanted our companies to do so. Our products are going to use recycled plastic bottles, and we’re going to have more lifestyle clothing. We’re so excited for that to drop. We have so many new products.” They’re most excited about their pregnancies. The Bellas are due two weeks apart in the summer. “We’re so thrilled,” Brie says. “Never in a million years did I think this could happen. It’s very hard to get pregnant. It wasn’t easy ever for me. The fact that we’re so close is amazing. People ask if we planned it. But you can’t plan pregnancy. Trust me.”

Cabanas After Dark kicks off Friday, March 6, with the Bella Twins, spirits and wine, live bands, passed appetizers and drinks. Following the event with the Bellas, the series will continue with Tiki Night on March 13, Country Barbecue on March 20, and the St. Tropez White Party on April 3. Tickets for the kick-off event on March 6 are $25 and include a featured drink. VIP cabanas are $379 to $1,999 and include VIP access to the rooftop event that starts at 7 p.m. and two to eight bottles of the rosé signed by Brie and Nikki. Tickets for the events from March 13 to April 3 are $10, with VIP cabanas available from $229 to $1,499, including bottle service and one to two bottles of the featured spirit. The Hotel Valley Ho is located at 6850 E. Main Street, Scottsdale. For more information, call 480-376-3600 or visit hotelvalleyho.com.