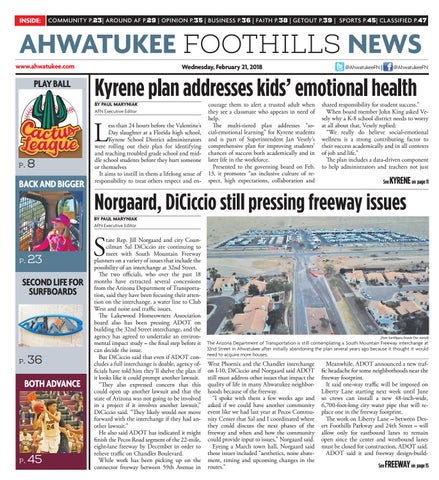 ess than 24 hours before the Valentine’s Day slaughter at a Florida high school, Kyrene School District administrators were rolling out their plan for identifying and reaching troubled grade school and middle school students before they hurt someone or themselves It aims to instill in them a lifelong sense of responsibility to treat others respect and en-

courage them to alert a trusted adult when they see a classmate who appears in need of help. The multi-tiered plan addresses “social-emotional learning” for Kyrene students and is part of Superintendent Jan Vesely’s comprehensive plan for improving students’ chances of success both academically and in later life in the workforce. Presented to the governing board on Feb. 13, it promotes “an inclusive culture of respect, high expectations, collaboration and

shared responsibility for student success.” When board member John King asked Vesely why a K-8 school district needs to worry at all about that, Vesely replied: “We really do believe social-emotional wellness is a strong contributing factor to their success academically and in all contexts of job and life.” The plan includes a data-driven component to help administrators and teachers not just

tate Rep. Jill Norgaard and city Councilman Sal DiCiccio are continuing to meet with South Mountain Freeway planners on a variety of issues that include the possibility of an interchange at 32nd Street. The two officials, who over the past 18 months have extracted several concessions from the Arizona Department of Transportation, said they have been focusing their attention on the interchange, a water line to Club West and noise and traffic issues. The Lakewood Homeowners Association board also has been pressing ADOT on building the 32nd Street interchange, and the agency has agreed to undertake an environ(Tom Sanfilippo/Inside Out Aerial) mental impact study – the final step before it The Arizona Department of Transportation is still contemplating a South Mountain Freeway interchange at 32nd Street in Ahwatukee after initially abandoning the plan several years ago because it thought it would can decide the issue. But DiCiccio said that even if ADOT con- need to acquire more houses. Meanwhile, ADOT announced a new trafcludes a full interchange is doable, agency of- West Phoenix and the Chandler interchange ficials have told him they’ll shelve the plan if on I-10, DiCiccio and Norgaard said ADOT fic headache for some neighborhoods near the it looks like it could prompt another lawsuit. still must address other issues that impact the freeway footprint. It said one-way traffic will be imposed on “They also expressed concern that this quality of life in many Ahwatukee neighborLiberty Lane starting next week until June could open up another lawsuit and that the hoods because of the freeway. “I spoke with them a few weeks ago and so crews can install a new 48-inch-wide, state of Arizona was not going to be involved in a project if it involves another lawsuit,” asked if we could have another community 6,700-foot-long city water pipe that will reDiCiccio said. “They likely would not move event like we had last year at Pecos Commu- place one in the freeway footprint. The work on Liberty Lane – between Desforward with the interchange if they had an- nity Center that Sal and I coordinated where they could discuss the next phases of the ert Foothills Parkway and 24th Street – will other lawsuit.” He also said ADOT has indicated it might freeway and when and how the community allow only for eastbound lanes to remain finish the Pecos Road segment of the 22-mile, could provide input to issues,” Norgaard said. open since the center and westbound lanes Eyeing a March town hall, Norgaard said must be closed for construction, ADOT said. eight-lane freeway by December in order to those issues included “aesthetics, noise abateADOT said it and freeway design-buildrelieve traffic on Chandler Boulevard. While work has been picking up on the ment, timing and upcoming changes in the See FREEWAY on page 15 connector freeway between 59th Avenue in routes.”