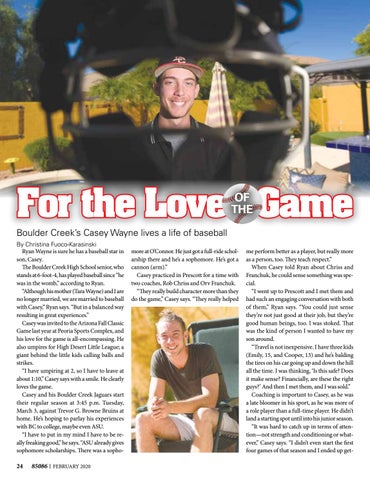 For the Love Game OF THE

Boulder Creek’s Casey Wayne lives a life of baseball By Christina Fuoco-Karasinski Ryan Wayne is sure he has a baseball star in son, Casey. The Boulder Creek High School senior, who stands at 6-foot-4, has played baseball since “he was in the womb,” according to Ryan. “Although his mother (Tara Wayne) and I are no longer married, we are married to baseball with Casey,” Ryan says. “But in a balanced way resulting in great experiences.” Casey was invited to the Arizona Fall Classic Game last year at Peoria Sports Complex, and his love for the game is all-encompassing. He also umpires for High Desert Little League; a giant behind the little kids calling balls and strikes. “I have umpiring at 2, so I have to leave at about 1:10,” Casey says with a smile. He clearly loves the game. Casey and his Boulder Creek Jaguars start their regular season at 3:45 p.m. Tuesday, March 3, against Trevor G. Browne Bruins at home. He’s hoping to parlay his experiences with BC to college, maybe even ASU. “I have to put in my mind I have to be really freaking good,” he says. “ASU already gives sophomore scholarships. There was a sopho-

more at O’Connor. He just got a full-ride scholarship there and he’s a sophomore. He’s got a cannon (arm).” Casey practiced in Prescott for a time with two coaches, Rob Chriss and Orv Franchuk. “They really build character more than they do the game,” Casey says. “They really helped

me perform better as a player, but really more as a person, too. They teach respect.” When Casey told Ryan about Chriss and Franchuk, he could sense something was special. “I went up to Prescott and I met them and had such an engaging conversation with both of them,” Ryan says. “You could just sense they’re not just good at their job, but they’re good human beings, too. I was stoked. That was the kind of person I wanted to have my son around. “Travel is not inexpensive. I have three kids (Emily, 15, and Cooper, 13) and he’s balding the tires on his car going up and down the hill all the time. I was thinking, ‘Is this safe? Does it make sense? Financially, are these the right guys?’ And then I met them, and I was sold.” Coaching is important to Casey, as he was a late bloomer in his sport, as he was more of a role player than a full-time player. He didn’t land a starting spot until into his junior season. “It was hard to catch up in terms of attention—not strength and conditioning or whatever,” Casey says. “I didn’t even start the first four games of that season and I ended up get-