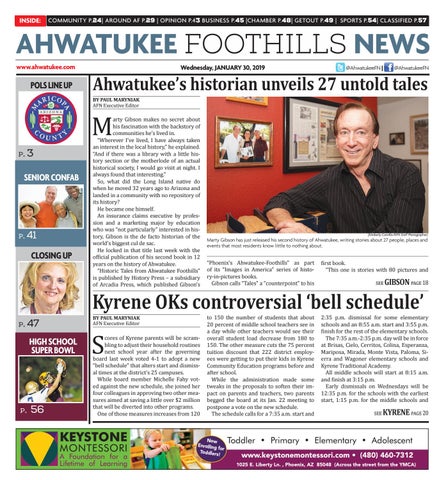 arty Gibson makes no secret about his fascination with the backstory of communities he’s lived in. “Wherever I’ve lived, I have always taken an interest in the local history,” he explained. “And if there was a library with a little history section or the motherlode of an actual historical society, I would go visit at night. I always found that interesting.” So, what did the Long Island native do when he moved 32 years ago to Arizona and landed in a community with no repository of its history? He became one himself. An insurance claims executive by profession and a marketing major by education who was “not particularly” interested in history, Gibson is the de facto historian of the world’s biggest cul de sac. He locked in that title last week with the official publication of his second book in 12 years on the history of Ahwatukee. “Historic Tales from Ahwatukee Foothills” is published by History Press – a subsidiary of Arcadia Press, which published Gibson’s

Marty Gibson has just released his second history of Ahwatukee, writing stories about 27 people, places and events that most residents know little to nothing about.

“Phoenix’s Ahwatukee-Foothills” as part of its “Images in America” series of history-in-pictures books. Gibson calls “Tales” a “counterpoint” to his

first book. “This one is stories with 80 pictures and

to 150 the number of students that about 20 percent of middle school teachers see in a day while other teachers would see their cores of Kyrene parents will be scram- overall student load decrease from 180 to bling to adjust their household routines 150. The other measure cuts the 75 percent next school year after the governing tuition discount that 222 district employboard last week voted 4-1 to adopt a new ees were getting to put their kids in Kyrene “bell schedule” that alters start and dismiss- Community Education programs before and al times at the district’s 25 campuses. after school. While board member Michelle Fahy votWhile the administration made some ed against the new schedule, she joined her tweaks in the proposals to soften their imHouses: four colleagues in approving two other mea- pactOpen on parents and teachers, two parents sures aimed at saving a little over $2 million begged the board at its Jan. 22 meeting to Saturday, February 20th at 9:00am that will be diverted into other programs. postpone a vote on the new schedule. at a.m. 6:00pm One of those measures increasesWednesday, from 120 TheFebruary schedule calls24th for a 7:35 start and

MONTESSORI A Foundation for a Lifetime of Learning