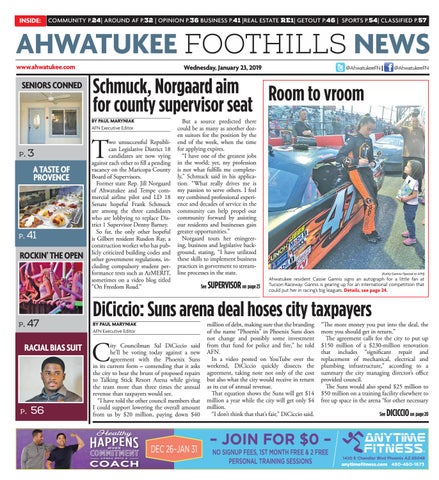 .3 A TASTE OF PROVENCE

wo unsuccessful Republican Legislative District 18 candidates are now vying against each other to fill a pending vacancy on the Maricopa County Board of Supervisors. Former state Rep. Jill Norgaard of Ahwatukee and Tempe commercial airline pilot and LD 18 Senate hopeful Frank Schmuck are among the three candidates who are lobbying to replace District 1 Supervisor Denny Barney. So far, the only other hopeful is Gilbert resident Rusdon Ray, a construction worker who has publicly criticized building codes and other government regulations, including compulsory student performance tests such as AzMERIT, sometimes on a video blog titled “On Freedom Road.”

But a source predicted there could be as many as another dozen suitors for the position by the end of the week, when the time for applying expires. “I have one of the greatest jobs in the world; yet, my profession is not what fulfills me completely,” Schmuck said in his application. “What really drives me is my passion to serve others. I feel my combined professional experience and decades of service in the community can help propel our community forward by assisting our residents and businesses gain greater opportunities.” Norgaard touts her eningeering, business and legislative background, stating, “I have utilitzed these skills to implement business practices in gorverment to streamline processes in the state. See

Ahwatukee resident Cassie Gannis signs an autograph for a little fan at Tucson Raceway. Gannis is gearing up for an international competition that could put her in racing’s big leagues. Details, see page 24.

ity Councilman Sal DiCiccio said he’ll be voting today against a new agreement with the Phoenix Suns in its current form – contending that it asks the city to bear the brunt of proposed repairs to Talking Stick Resort Arena while giving the team more than three times the annual revenue than taxpayers would see. “I have told the other council members that I could support lowering the overall amount from us by $20 million, paying down $40

million of debt, making sure that the branding of the name “Phoenix” in Phoenix Suns does not change and possibly some investment from that fund for police and fire,” he told AFN. In a video posted on YouTube over the weekend, DiCiccio quickly dissects the agreement, taking note not only of the cost but also what the city would receive in return as its cut of annual revenue. That equation shows the Suns will get $14 million a year while the city will get only $4 million. “I don’t think that that’s fair,” DiCiccio said.

“The more money you put into the deal, the more you should get in return.” The agreement calls for the city to put up $150 million of a $230-million renovation that includes “significant repair and replacement of mechanical, electrical and plumbing infrastructure,” according to a summary the city managing director’s office provided council. The Suns would also spend $25 million to $50 million on a training facility elsewhere to free up space in the arena “for other necessary See