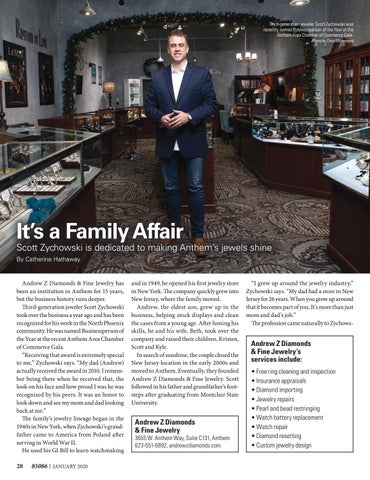 Third-generation jeweler Scott Zychowski was recently named Businessperson of the Year at the Anthem Area Chamber of Commerce Gala. (Photo by Chris Mortenson)

Andrew Z Diamonds & Fine Jewelry has been an institution in Anthem for 15 years, but the business history runs deeper. Third-generation jeweler Scott Zychowski took over the business a year ago and has been recognized for his work in the North Phoenix community. He was named Businessperson of the Year at the recent Anthem Area Chamber of Commerce Gala. “Receiving that award is extremely special to me,” Zychowski says. “My dad (Andrew) actually received the award in 2010. I remember being there when he received that, the look on his face and how proud I was he was recognized by his peers. It was an honor to look down and see my mom and dad looking back at me.” The family’s jewelry lineage began in the 1940s in New York, when Zychowski’s grandfather came to America from Poland after serving in World War II. He used his GI Bill to learn watchmaking

and in 1949, he opened his first jewelry store in New York. The company quickly grew into New Jersey, where the family moved. Andrew, the eldest son, grew up in the business, helping stock displays and clean the cases from a young age. After honing his skills, he and his wife, Beth, took over the company and raised their children, Kristen, Scott and Kyle. In search of sunshine, the couple closed the New Jersey location in the early 2000s and moved to Anthem. Eventually, they founded Andrew Z Diamonds & Fine Jewelry. Scott followed in his father and grandfather’s footsteps after graduating from Montclair State University.

“I grew up around the jewelry industry,” Zychowski says. “My dad had a store in New Jersey for 26 years. When you grow up around that it becomes part of you. It’s more than just mom and dad’s job.” The profession came naturally to Zychows-