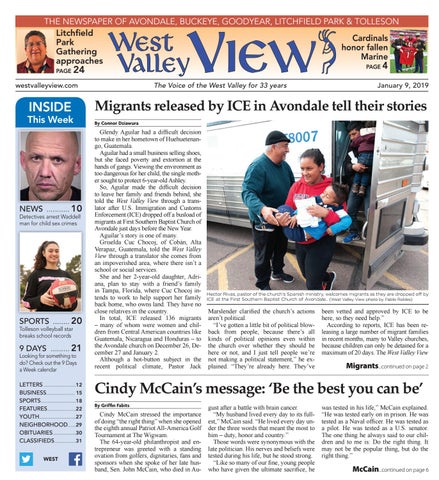 The Voice of the West Valley for 33 years

Glendy Aguilar had a difﬁcult decision to make in her hometown of Huehuetenango, Guatemala. Aguilar had a small business selling shoes, but she faced poverty and extortion at the hands of gangs. Viewing the environment as too dangerous for her child, the single mother sought to protect 6-year-old Ashley. So, Aguilar made the difﬁcult decision to leave her family and friends behind, she told the West Valley View through a translator after U.S. Immigration and Customs Enforcement (ICE) dropped off a busload of migrants at First Southern Baptist Church of Avondale just days before the New Year. Aguilar’s story is one of many. Griselda Cuc Chocoj, of Cobán, Alta Verapaz, Guatemala, told the West Valley View through a translator she comes from an impoverished area, where there isn’t a school or social services. She and her 2-year-old daughter, Adriana, plan to stay with a friend’s family in Tampa, Florida, where Cuc Chocoj intends to work to help support her family back home, who owns land. They have no close relatives in the country. In total, ICE released 136 migrants – many of whom were women and children from Central American countries like Guatemala, Nicaragua and Honduras – to the Avondale church on December 26, December 27 and January 2. Although a hot-button subject in the recent political climate, Pastor Jack

Hector Rivas, pastor of the church’s Spanish ministry, welcomes migrants as they are dropped off by ICE at the First Southern Baptist Church of Avondale.. (West Valley View photo by Pablo Robles)

Marslender clariﬁed the church’s actions aren’t political. “I’ve gotten a little bit of political blowback from people, because there’s all kinds of political opinions even within the church over whether they should be here or not, and I just tell people we’re not making a political statement,” he explained. “They’re already here. They’ve

been vetted and approved by ICE to be here, so they need help.” According to reports, ICE has been releasing a large number of migrant families in recent months, many to Valley churches, because children can only be detained for a maximum of 20 days. The West Valley View

Cindy McCain’s message: ‘Be the best you can be’ By Griffin Fabits

Cindy McCain stressed the importance of doing “the right thing” when she opened the eighth annual Patriot All-America Golf Tournament at The Wigwam. The 64-year-old philanthropist and entrepreneur was greeted with a standing ovation from golfers, dignitaries, fans and sponsors when she spoke of her late husband, Sen. John McCain, who died in Au-

gust after a battle with brain cancer. “My husband lived every day to its fullest,” McCain said. “He lived every day under the three words that meant the most to him – duty, honor and country.” Those words were synonymous with the late politician. His nerves and beliefs were tested during his life, but he stood strong. “Like so many of our ﬁne, young people who have given the ultimate sacriﬁce, he