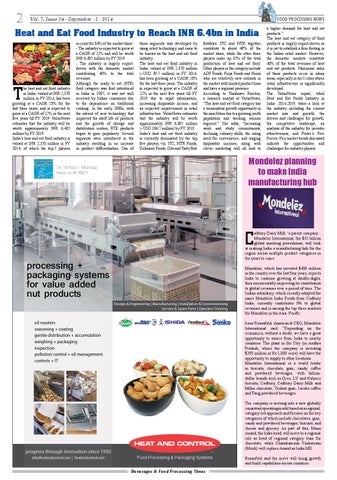 account for 84% of the market share. - The industry is expected to grow at a CAGR of 22% and will be worth INR 6,405 million by FY 2019 - The industry is largely exportdriven with the domestic market contributing 40% to the total revenues Although the ready to eat (RTE) food category was first introduced in India in 1987, it was not well received by Indian consumers due to the dependence on traditional cooking. In the early 2000s, with the advent of new technology that improved the shelf life of products and the growth of storage and distribution centres, RTE products began to gain popularity. Several segments were introduced in the industry resulting in an increase in product differentiation. One of

these segments was developed by using retort technology, and came to be known as the heat and eat food industry. The heat and eat food industry in India, valued at INR 2,370 million (~USD 39.5 million) in FY 2014, has been growing at a CAGR 18% for the last three years. The industry is expected to grow at a CAGR of 22% in the next five years till FY 2019 due to rapid urbanisation, increasing disposable income, and an expected improvement in retail infrastructure. ValueNotes estimates that the industry will be worth approximately INR 6,405 million (~USD 106.7 million) by FY 2019. India’s heat and eat food industry is currently dominated by the top five players, viz. ITC, MTR Foods, Kohinoor Foods, Gits and Tasty Bite

Eatables. ITC and MTR together contribute to about 49% of the market share, while the other three players make up 35% of the total production of heat and eat food. Other players in the category include ADF Foods, Priya Foods and Heinz who are relatively new entrants in the market with limited product lines and have a regional presence. According to Vaishnavi Raichur, a research analyst at ValueNotes, “The heat and eat food category has a tremendous growth opportunity in the near future due to a growing youth population and working woman segment.” She adds, “Increasing work and study commitments, declining culinary skills, the rising need for convenience, and surging disposable incomes, along with clever marketing will all lead to

a higher demand for heat and eat products.” The heat and eat category of food products is largely export-driven as it is yet to establish a firm footing in the Indian retail market. However, the domestic markets constitute 40% of the total revenues of heat and eat products. Maximum sales of these products occur in urban areas, especially in tier I cities where retail infrastructure is significantly developed. The ValueNotes report, titled Heat and Eat Foods Industry in India: 2014-2019, takes a look at the industry including the current market size and growth, the drivers and challenges for growth, the competitive landscape, an analysis of the industry for investor attractiveness, and Porter’s Five Forces. Key market trends discussed indicate the opportunities and challenges for industry players.

adbury Dairy Milk ‘s parent company Mondelez International, the $35-billion global snacking powerhouse, will look at making India a manufacturing hub for the region across multiple product categories in the years to come.

Irene Rosenfeld, chairman &amp; CEO, Mondelez International said, “Depending on the economics, without a doubt, we have a great opportunity to source from India to nearby countries. The plant in Sri City (in Andhra Pradesh, where the company is investing $200 million or Rs 1,000 crore) will have the opportunity to supply to other locations. Mondelez International is a world leader in biscuits, chocolate, gum, candy, coffee and powdered beverages, with billiondollar brands such as Oreo, LU and Nabisco biscuits; Cadbury, Cadbury Dairy Milk and Milka chocolate; Trident gum; Jacobs coffee and Tang powdered beverages. The company is moving into a new globally consistent operating model based on a regional, category-led approach and focuses on the key categories of which include chocolates; gum, candy and powdered beverages; biscuits; and cheese and grocery. As part of this, Manu Anand, the India head, will move to a regional role as head of regional category team for chocolate, while Chandramouli Venkatesan (Mouli) will replace Anand as India MD.

Mondelez, which has invested $400 million in the country over the last four years, expects India to continue growing at double-digits, thus incrementally improving its contribution to global revenues over a period of time. The Indian subsidiary, which recently adopted the name Mondelez India Foods from Cadbury India, currently contributes 3% to global revenues and is among the top three markets for Mondelez in the Asia- Pacific.

Rosenfeld said the move will bring growth and build capabilities across countries.