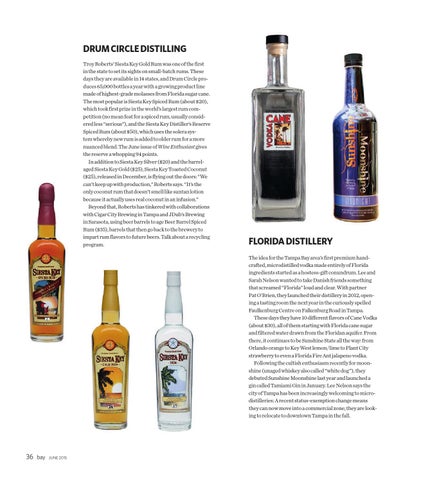 DRUM CIRCLE DISTILLING Troy Roberts’ Siesta Key Gold Rum was one of the first in the state to set its sights on small-batch rums. These days they are available in 14 states, and Drum Circle produces 65,000 bottles a year with a growing product line made of highest-grade molasses from Florida sugar cane. The most popular is Siesta Key Spiced Rum (about $20), which took first prize in the world’s largest rum competition (no mean feat for a spiced rum, usually considered less “serious”), and the Siesta Key Distiller’s Reserve Spiced Rum (about $50), which uses the solera system whereby new rum is added to older rum for a more nuanced blend. The June issue of Wine Enthusiast gives the reserve a whopping 94 points. In addition to Siesta Key Silver ($20) and the barrelaged Siesta Key Gold ($25), Siesta Key Toasted Coconut ($25), released in December, is flying out the doors: “We can’t keep up with production,” Roberts says. “It’s the only coconut rum that doesn’t smell like suntan lotion because it actually uses real coconut in an infusion.” Beyond that, Roberts has tinkered with collaborations with Cigar City Brewing in Tampa and JDub’s Brewing in Sarasota, using beer barrels to age Beer Barrel Spiced Rum ($35), barrels that then go back to the brewery to impart rum flavors to future beers. Talk about a recycling program.

FLORIDA DISTILLERY The idea for the Tampa Bay area’s first premium handcrafted, microdistilled vodka made entirely of Florida ingredients started as a hostess-gift conundrum. Lee and Sarah Nelson wanted to take Danish friends something that screamed “Florida” loud and clear. With partner Pat O’Brien, they launched their distillery in 2012, opening a tasting room the next year in the curiously spelled Faulkenburg Centre on Falkenburg Road in Tampa. These days they have 10 different flavors of Cane Vodka (about $30), all of them starting with Florida cane sugar and filtered water drawn from the Floridan aquifer. From there, it continues to be Sunshine State all the way: from Orlando orange to Key West lemon/lime to Plant City strawberry to even a Florida Fire Ant jalapeno vodka. Following the cultish enthusiasm recently for moonshine (unaged whiskey also called “white dog”), they debuted Sunshine Moonshine last year and launched a gin called Tamiami Gin in January. Lee Nelson says the city of Tampa has been increasingly welcoming to microdistilleries: A recent status-exemption change means they can now move into a commercial zone; they are looking to relocate to downtown Tampa in the fall.

The Art Of Food And Drink

The Art Of Food And Drink