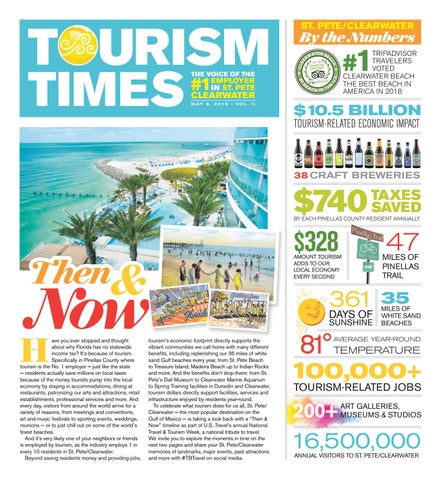 THE VOICE OF THE

BY EACH PINELLAS COUNTY RESIDENT ANNUALLY

ave you ever stopped and thought about why Florida has no statewide income tax? It’s because of tourism. Specifically in Pinellas County where tourism is the No. 1 employer − just like the state − residents actually save millions on local taxes because of the money tourists pump into the local economy by staying in accommodations, dining at restaurants, patronizing our arts and attractions, retail establishments, professional services and more. And every day, visitors from around the world arrive for a variety of reasons, from meetings and conventions, art and music festivals to sporting events, weddings, reunions − or to just chill out on some of the world’s finest beaches. And it's very likely one of your neighbors or friends is employed by tourism, as the industry employs 1 in every 10 residents in St. Pete/Clearwater. Beyond saving residents money and providing jobs,

tourism’s economic footprint directly supports the vibrant communities we call home with many different benefits, including replenishing our 35 miles of white sand Gulf beaches every year, from St. Pete Beach to Treasure Island, Madeira Beach up to Indian Rocks and more. And the benefits don’t stop there: from St. Pete’s Dalí Museum to Clearwater Marine Aquarium to Spring Training facilities in Dunedin and Clearwater, tourism dollars directly support facilities, services and infrastructure enjoyed by residents year-round. To celebrate what tourism does for us all, St. Pete/ Clearwater − the most popular destination on the Gulf of Mexico − is taking a look back with a “Then & Now” timeline as part of U.S. Travel’s annual National Travel & Tourism Week, a national tribute to travel. We invite you to explore the moments in time on the next two pages and share your St. Pete/Clearwater memories of landmarks, major events, past attractions and more with #TBTravel on social media.

AMOUNT TOURISM ADDS TO OUR LOCAL ECONOMY EVERY SECOND

A look back in time Share your old photos at #TBTravel

It’s National Travel and Tourism Week and here in St. Pete/Clearwater, we’ve been delighting visitors with our beaches, museums, and other amenities for more than a century. Use #TBTravel to share your old photos of landmarks, neighborhoods, major events, and other attractions from “back in the day!"

culture emerges in the Weedon Island Preserve area. In 2001, a prehistoric canoe likely crafted by its people was discovered in the area.

Opened 54 years before, the sprawling bazaar filled with talking “m chickens, and other wacky novelties, was once a $22-million-a-yea

1968: The Spongeorama Museum 1934: The Gulfport Casino makes its debut,

quickly becoming a popular spot for dances and community events. In 2015, the art deco venue earns its designation on the National Register of Historic Places.

1897: The Belleview Hotel opens. Built by railroad tycoon Henry B. Plant to boost tourism in the area, the glamorous hotel hosts famous guests including the Duke of Windsor, Thomas Edison, and Barack Obama, before closing in 2009. Currently, the land is being redeveloped to include a boutique hotel.

gendary Pink Palace, which d other facilities, before toric Hotels.

2017: St. Pete-Clearwater International Airport reveals plans for a five-year, $120 million infrastructure improvement project to accommodate the record number of passengers each year. More than 2 million travelers use the airport in 2017, up 12% from 2016.

a beachside promenade with lush landscaping and amenities, in hopes of attracting more hotel development. Nearly 2,000 new hotel rooms pop up in the next decade.

There’s a reason Florida doesn’t have a state income tax and tourism is that reason. Every year tourism contributes billions of dollars to the state’s economy as its No. 1 industry. I’m thankful for our visitors.” Commissioner Kenneth Welch, Chair, Pinellas Board of County Commissioners and Tourist Development Council

Without visitors coming to the St. Pete/Clearwater area I wouldn’t be a fishing guide. I would probably have a boring desk job. Tourism is very important in our industry. It makes up 60-70% of my business.” Captain Cory Palmer, Florida Tarpon Fishing Charters

Talks Voices from around Tampa Bay

Without tourism, the landscape here, especially in Dunedin, would be entirely different. Tourism is the difference between us surviving and not.”

As local tourism grows, so does The Florida Orchestra’s audience. A significant percentage of our tickets are sold to patrons from out of state, which in turn spreads our reputation as Florida’s premier orchestra well beyond Tampa Bay.”

Without visitors to Clearwater Marine Aquarium our mission of rescue, rehab and release would be greatly diminished.” Robin Bates, Marine Mammal Manager

Janet Paroo, Chair of The Florida Orchestra’s Board of Directors

Tourism is essential to the cultural and economic health of the Bay Area. Visitors show us more about who we are and give us more of what we love. Without visitors, Tampa Bay would not be the amazing place it is to live. We need them. We love them. We count on them.” Maryann Ferenc, Owner, Mise en Place, Inc.; Chair, VISIT FLORIDA

We would be completely dismantled without tourism. We have over 800 employees that depend on visitors coming here year in and year out.” Frank Chivas, Owner, Bay Star Restaurant Group

Tourism has a great impact on residential real estate. After several years of visiting they are interested in buying homes. Without them, we feel that there would be a hole in the market and we need the impact of tourism throughout St. Pete/Clearwater." Robert Glaser, CEO, Smith & Associates Real Estate

Without tourism, the downtown St. Pete that we see today – this dynamic, beautiful area – would not be what it is. We would not see this reemergence of the arts, construction jobs, sports, the Tampa Bay Rowdies – it’s mainly due to that driving factor of tourists discovering, enjoying and coming back to our destination.” Joe Jimenez, Managing Director, The Edwards Group

I N PARTN E RSH I P WITH

The Voice of the #1 Employer in St. Pete, Clearwater

The Voice of the #1 Employer in St. Pete, Clearwater