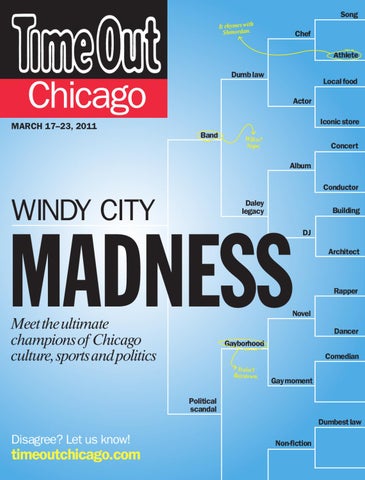 Meet the ultimate champions of Chicago culture, sports and politics

What’s the most iconic Chicago food? Which of our city’s many corruption scandals is the most mortifying? And really, can we finally agree on who was the best athlete to grace a Chicago playing field or court? Narrowing down the contenders via NCAA tourney–style brackets seems like a fair way to pick the ultimate victor, but our choices may surprise you. 1

1 Honestly, when was the last time you had an Italian beef? [Ed. note: weekly.] 2 The snap of casing, the heat of sport peppers, the crunch of the pickle: Other cities have Uno’s, but the Chicago dog is our true local treasure.

1 Hint: You might not want to bet on Wilco taking the trophy for best Chicago band.

1 We’re holding that sitcom career against Butkus. Forever. 2 Nagurski is the only player to be an all-pro at three non-kicking positions, but that’s not enough to get by Sayers. 3 Hawks fans could argue this one all day, but Stosh has the stats.

While March Madness rages, Chicago has its own hotly contested battles.

The Color of Money Mickey One

Above the Law The Fugitive

The Fugitive The Blues Brothers

1 Michael Mann deserves a bracket of his own. 2 Both are iconic suburban movies, but Ferris actually hauls his ass downtown. 3 Two responses to 1919 Chicago scandals: Eight Men Out recounts the Black Sox’s thrown World Series, while Within Our Gates, largely set in the South, was a reaction to the city’s race riots. 4 Chicago 10 remembers the 1968 protests; Medium Cool was actually there. 5 This is the Cabrini-Green commemorative bracket. Candyman uses the projects glibly, but Hoop Dreams beats with the pulse of urban life. 6 You could change High Fidelity’s title to Wicker Park and Wicker Park’s title to High Bullshit. 7 In the battle of Chicago breakup movies, the one with top-five lists comes out on top. 8 Hoop Dreams is not just a movie but life; not just Chicago but America.

1 The 1980s federal corruption investigation proved connections between organized crime in the old 1st Ward, City Hall and the courts. 2 Widespread corruption in the Secretary of State’s office during the ’90s involved DMV employees issuing commercial driver’s licenses for bribes; charges led to some 70 convictions, including former Gov. George Ryan, who’s served about half of a six-and-a-half-year sentence on racketeering, tax fraud, conspiracy and lying to the FBI. 3 In the early ’80s, 50 lawyers and 15 Cook County court judges were convicted after FBI moles bribed judges to fix fake cases and planted wire-taps in judges’ chambers. 4 In 1895, the Gray Wolves, a corrupt clique in the City Council (imagine!), awarded the city’s lucrative gas utility contract to Ogden Gas Company, a fake firm invented by the aldermen. They enticed the previous contract holder to buy up the rights to Ogden. 5 This 1990s federal probe into ghost payrolling centered on 39th Ward Ald. Anthony Laurino, who hired as many as 35 family members and friends. Among the 35 convicted were three aldermen and a state senator. 6 Clout-heavy (and some mob-connected) trucking firms were paid to do little or no city work. An investigation sparked by a 2004 Sun-Times piece yielded more than 40 convictions, including Mayor Daley’s former patronage chief Robert Sorich and former City Clerk Jim Laski. 7 Working as a mole for the FBI in the early ’90s, a Chicago construction-business insider bribed city officials to put his phantom company to work. Convictions included six aldermen, a Chicago water commissioner and the president of the Metropolitan Water Reclamation District. 8 A bleepin’ golden orgy of shame

1 Rockford’s a suburb, right? 2 Jeff Tweedy helped shape the altcountry scene, before turning his band into an art-rock ensemble, and later a jam act. 3 Curtis Mayfield’s Impressions rocketed doo-wop out of its teenage phase, experimenting with harmony, rhythm and social commentary to define American soul music.

1 Bill, we love you, but two Garfield movies? 2 Our brackets come at a bad time for being John Malkovich—Secretariat’s still fresh in our minds. 3 Morton’s most recent credit: Who’s Afraid of Virginia Woolf? Reilly’s: Cedar Rapids. 4 Chaplin made a dozen or so silent shorts for Chicago’s Essanay studio in 1915, but only one was filmed here.

Grant Achatz 1 Soul-food royalty, Stewart served her famous fried chicken and biscuits on Chicago’s West Side for more than four decades (she passed away last June). 2 As chef and proprietor of the legendary Le Francais in Wheeling, Banchet changed how Americans understood French food. 3 Peas/carrots, beets/goat cheese, Tramonto/Gand—until last year, when Tramonto split from Tru for New Orleans. Gand is still a partner at Tru. 4 Trotter’s legend has faded, while Sohn’s has only grown. 5 Bayless trained Paul Kahan. Student has not yet become the teacher. 6 Achatz is known around the world, whereas Bayless is famous in the U.S., Canada…and every village in Oaxaca.

Alexander Calder’s Flamingo 1 After “The Picasso” was unveiled in 1967, Ald. John J. Hoellen begged the city to replace it with a statue of Cubs great Ernie Banks.

1 The year the Cubs set a modern-era record with 116 wins, they still lost the Series to the White Sox. 2 While the ’85 Bears and Jordan’s Bulls set up residency in the hearts and minds of Chicagoans, only the Bears made it permanent. Players from the ’85 Bears are all over this town, but no one writes “where are they now?” pieces about Craig Hodges.

1 Kazurinsky barely made this list. He actually barely made SNL: He was cast at the last minute (bumping Paul Reubens). 2 Long earned five Emmy nods (and one win) for her role as Diane on Cheers and Frasier.

Cap D of 2 All Natural

Cap D of All Natural

Common 1 Famously crushed Eminem in a battle. 2 Practices corporate law. Under his real name, David Kelly, obviously. 3 Long before producing hits for Jay-Z and Kanye, he released the lost gem Accept Your Own and Be Yourself. 4 The bald MC captured life on the West and South Sides like no other, bringing speed, grace, humor and charm, thus setting the standard for Chicago hip-hop.

The Coast of Chicago,

The Adventures of Augie March

The Adventures of Augie March

The Jungle, Upton Sinclair The Jungle

The Jungle The Studs Lonigan Trilogy

The Man with the Golden Arm, Nelson Algren

1 Point taken, it’s not a novel. But it’s still one of the best Chicago fictions of all time. 2 Check out the upset! Wright’s novel may not be as epic, but it’s more enduring. 3 Sinclair’s galvanizing social novel changed the city at the time, but writing like Bellow’s is timeless.

Jackson Five at the Sunday Night Amateur Talent show at the Regal Theater, 1967

Disco Demolition leads to a riot at Comiskey, 1979

1 And you thought it was just steroids. 2 Disco Demolition was actually kind of cool, from a distance.

Bill Sianis and his goat kicked out of World Series game at Wrigley, 1945

“They have cut state mentalhealth facilities all over the state. That is state money. Underline that. S-A-T-E money.”

“Scrootened” “Scrutiny? What else do you want? Do you want to take my shorts? Give me a break…. Go scrutinize yourself! I get scrootened every day.”

1 The green roof movement; promotion of LEED certification for buildings 2 Using tax-increment financing—taxes set aside to improve “blighted” areas—to fund development in prosperous ’hoods 3 The acquisition and destruction of properties in Bensenville by using eminent domain 4 The city faces a $654 million budget gap as Daley leaves office. 5 Mayor Daley’s iron-fist rule over the City Council begets everything else in his tenure—his greatest accomplishments and his most scarring failures.

“It’s been very effective. [Picks up gun from press conference table.] If I put this up your butt, you’ll find out how effective it is.”

The Near North Side becomes a center of gay activity during the Roaring Twenties. Variety reports 35 “pansy parlors” by 1930. African-American Alfred Finnie launches the first drag ball on the South Side in 1935.

1 As groundbreaking as it sounds, the striking down of Illinois’s antisodomy laws was more about revising criminal codes than gay rights. 2 The first Pride Parade happened in Bughouse Square in the Gold Coast. It moved to Clark and Diversey the following year. 3 Chicago was the last major U.S. city to enact a human-rights ordinance protecting gays and lesbians. 4 We were the first city to officially tell the world, “We’re here, we’re queer, get used to it.”

Gay and Lesbian Hall of Fame

Most legendary album recorded in chicago

1 Isaac Brock was jumped and had his jaw broken outside the studio. The band spent the healing time adding layers and layers. 2 Sorry, Siamese Dream was recorded outside Atlanta. 3 On Top wins by a Pomade-slicked hair. Bo brought the killer shuffle, but Chuck swaggered with menace, innuendo, humor and more than enough riffs for the Brits to rip off.

Mark Farina Derrick Carter 1 The term house may have come from Frankie Knuckles, but when he left for New York in the ’80s, it was Hardy’s kinetic energy and reputation that solidified the genre. His sets at the Music Box are the stuff of legend.

Jeanie B! and the Jelly Beans

Best nonfiction book about cHICAGO The Jungle by Upton Sinclair

The Jungle by Upton Sinclair

The Jungle by Upton Sinclair

The Devil in the White City by Erik Larson

Sears Sears 1 Both the CSO and its audience revered the Hungarian baton wielder as a gentleman and a peerless artist whose poise in performance during his 23-year tenure was unequaled. The skeptical might investigate Solti’s complete Mahler recordings or his Ring Cycle with the Symphony.

1 There’s something inescapably inauthentic about a Californian singing of “Harland High School” and the “West Side Mission Home” at “109 West Charlotte.” Hell, that latter address doesn’t even exist. But Haggard didn’t have Google Maps, only crocodile tears of whiskey and a convict’s heart.

Merle Haggard, “Sidewalks of Chicago” Freddy Cole, “On the South Side of Chicago”

Lorraine Hansberry (A Raisin in the Sun)

Brett Neveu (Do the Hustle)

The Green Mill (Thief, The Dilemma)

While March Madness rages, Chicago has its own hotly contested battles. 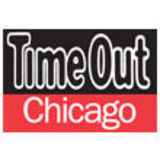