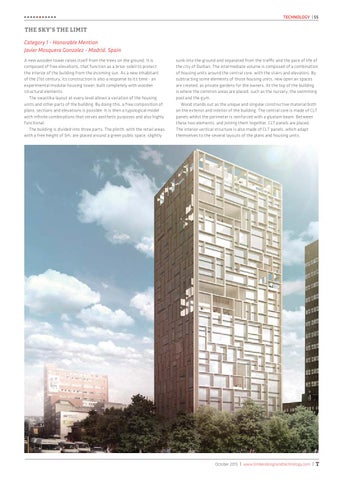 THE SKYâ&#x20AC;&#x2122;S THE LIMIT Category 1 - Honorable Mention Javier Mosquera Gonzalez - Madrid, Spain A new wooden tower raises itself from the trees on the ground. It is composed of free elevations, that function as a brise-soleil to protect the interior of the building from the incoming sun. As a new inhabitant of the 21st century, its construction is also a response to its time - an experimental modular housing tower, built completely with wooden structural elements. The swastika layout at every level allows a variation of the housing units and other parts of the building. By doing this, a free composition of plans, sections and elevations is possible. It is then a typological model with infinite combinations that serves aesthetic purposes and also highly functional. The building is divided into three parts. The plinth, with the retail areas with a free height of 5m, are placed around a green public space, slightly

sunk into the ground and separated from the traffic and the pace of life of the city of Durban. The intermediate volume is composed of a combination of housing units around the central core, with the stairs and elevators. By subtracting some elements of those housing units, new open air spaces are created, as private gardens for the owners. At the top of the building is where the common areas are placed, such as the nursery, the swimming pool and the gym. Wood stands out as the unique and singular constructive material both on the exterior and interior of the building. The central core is made of CLT panels whilst the perimeter is reinforced with a gluelam beam. Between these two elements, and joining them together, CLT panels are placed. The interior vertical structure is also made of CLT panels, which adapt themselves to the several layouts of the plans and housing units.