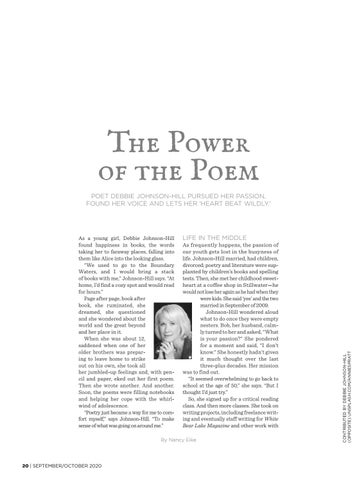 The Power of the Poem POET DEBBIE JOHNSON-HILL PURSUED HER PASSION, FOUND HER VOICE AND LETS HER &#39;HEART BEAT WILDLY.&#39;

LIFE IN THE MIDDLE

As frequently happens, the passion of our youth gets lost in the busyness of life. Johnson-Hill married, had children, divorced; poetry and literature were supplanted by children’s books and spelling tests. Then, she met her childhood sweetheart at a coffee shop in Stillwater—he would not lose her again as he had when they were kids. She said ‘yes’ and the two married in September of 2009. Johnson-Hill wondered aloud what to do once they were empty nesters. Bob, her husband, calmly turned to her and asked, “What is your passion?” She pondered for a moment and said, “I don’t know.” She honestly hadn’t given it much thought over the last three-plus decades. Her mission was to find out. “It seemed overwhelming to go back to school at the age of 50,” she says. “But I thought I’d just try.” So, she signed up for a critical reading class. And then more classes. She took on writing projects, including freelance writing and eventually staff writing for White Bear Lake Magazine and other work with

As a young girl, Debbie Johnson-Hill found happiness in books, the words taking her to faraway places, falling into them like Alice into the looking glass. “We used to go to the Boundary Waters, and I would bring a stack of books with me,” Johnson-Hill says. “At home, I’d find a cozy spot and would read for hours.” Page after page, book after book, she ruminated, she dreamed, she questioned and she wondered about the world and the great beyond and her place in it. When she was about 12, saddened when one of her older brothers was preparing to leave home to strike out on his own, she took all her jumbled-up feelings and, with pencil and paper, eked out her first poem. Then she wrote another. And another. Soon, the poems were filling notebooks and helping her cope with the whirlwind of adolescence. “Poetry just became a way for me to comfort myself,” says Johnson-Hill. “To make sense of what was going on around me.”

From poetry to piano to plays—we highlight some delightfully creative souls this month. And read words of wisdom and hope from some class of 2020 graduates. 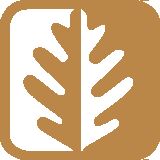