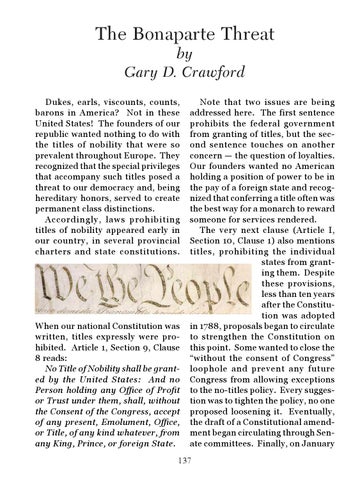 Dukes, earls, viscounts, counts, barons in America? Not in these United States! The founders of our republic wanted nothing to do with the titles of nobility that were so prevalent throughout Europe. They recognized that the special privileges that accompany such titles posed a threat to our democracy and, being hereditary honors, served to create permanent class distinctions. Accordingly, laws prohibiting titles of nobility appeared early in our country, in several provincial charters and state constitutions.

When our national Constitution was written, titles expressly were prohibited. Article 1, Section 9, Clause 8 reads: No Title of Nobility shall be granted by the United States: And no Person holding any Office of Profit or Trust under them, shall, without the Consent of the Congress, accept of any present, Emolument, Office, or Title, of any kind whatever, from any King, Prince, or foreign State.

Note that two issues are being addressed here. The first sentence prohibits the federal government from granting of titles, but the second sentence touches on another concern — the question of loyalties. Our founders wanted no American holding a position of power to be in the pay of a foreign state and recognized that conferring a title often was the best way for a monarch to reward someone for services rendered. The very next clause (Article I, Section 10, Clause 1) also mentions titles, prohibiting the individual states from granting them. Despite these provisions, less than ten years after the Constitution was adopted in 1788, proposals began to circulate to strengthen the Constitution on this point. Some wanted to close the “without the consent of Congress” loophole and prevent any future Congress from allowing exceptions to the no-titles policy. Every suggestion was to tighten the policy, no one proposed loosening it. Eventually, the draft of a Constitutional amendment began circulating through Senate committees. Finally, on January