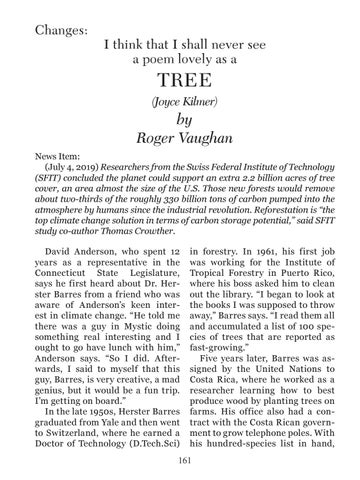 by Roger Vaughan News Item: (July 4, 2019) Researchers from the Swiss Federal Institute of Technology (SFIT) concluded the planet could support an extra 2.2 billion acres of tree cover, an area almost the size of the U.S. Those new forests would remove about two-thirds of the roughly 330 billion tons of carbon pumped into the atmosphere by humans since the industrial revolution. Reforestation is “the top climate change solution in terms of carbon storage potential,” said SFIT study co-author Thomas Crowther. David Anderson, who spent 12 years as a representative in the Connecticut State Legislature, says he first heard about Dr. Herster Barres from a friend who was aware of Anderson’s keen interest in climate change. “He told me there was a guy in Mystic doing something real interesting and I ought to go have lunch with him,” Anderson says. “So I did. Afterwards, I said to myself that this guy, Barres, is very creative, a mad genius, but it would be a fun trip. I’m getting on board.” In the late 1950s, Herster Barres graduated from Yale and then went to Switzerland, where he earned a Doctor of Technology (D.Tech.Sci)

in forestry. In 1961, his first job was working for the Institute of Tropical Forestry in Puerto Rico, where his boss asked him to clean out the library. “I began to look at the books I was supposed to throw away,” Barres says. “I read them all and accumulated a list of 100 species of trees that are reported as fast-growing.” Five years later, Barres was assigned by the United Nations to Costa Rica, where he worked as a researcher learning how to best produce wood by planting trees on farms. His office also had a contract with the Costa Rican government to grow telephone poles. With his hundred-species list in hand,