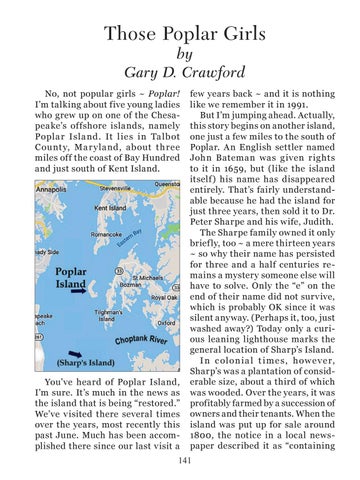 No, not popular girls ~ Poplar! I’m talking about five young ladies who grew up on one of the Chesapeake’s offshore islands, namely Popla r Isla nd. It lie s in Ta lbot C ount y, Ma r yla nd, about t hree miles off the coast of Bay Hundred and just south of Kent Island.

You’ve heard of Poplar Island, I’m sure. It’s much in the news as the island that is being “restored.” We’ve visited there several times over the years, most recently this past June. Much has been accomplished there since our last visit a

few years back ~ and it is nothing like we remember it in 1991. But I’m jumping ahead. Actually, this story begins on another island, one just a few miles to the south of Poplar. An English settler named John Bateman was given r ights to it in 1659, but (like the island itself ) his name has disappeared entirely. That’s fairly understandable because he had the island for just three years, then sold it to Dr. Peter Sharpe and his wife, Judith. The Sharpe family owned it only brief ly, too ~ a mere thirteen years ~ so why their name has persisted for three and a half centuries remains a mystery someone else will have to solve. Only the “e” on the end of their name did not survive, which is probably OK since it was silent anyway. (Perhaps it, too, just washed away?) Today only a curious leaning lighthouse marks the general location of Sharp’s Island. I n c o l o n i a l t i m e s , h o w e v e r, Sharp’s was a plantation of considerable size, about a third of which was wooded. Over the years, it was profitably farmed by a succession of owners and their tenants. When the island was put up for sale around 1800, the notice in a local newspaper described it as “containing