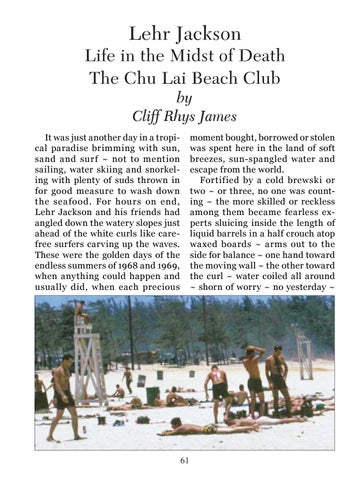 It was just another day in a tropical paradise brimming with sun, sand and sur f ~ not to mention sailing, water skiing and snorkeling with plenty of suds thrown in for good measure to wash down t he seafood. For hours on end, Lehr Jackson and his friends had angled down the watery slopes just ahead of the white curls like carefree surfers carving up the waves. These were the golden days of the endless summers of 1968 and 1969, when anything could happen and usually did, when each precious

moment bought, borrowed or stolen was spent here in the land of soft breezes, sun-spangled water and escape from the world. Fortified by a cold brewski or two ~ or three, no one was counting ~ the more skilled or reckless among them became fearless experts sluicing inside the length of liquid barrels in a half crouch atop waxed boards ~ arms out to the side for balance ~ one hand toward the moving wall ~ the other toward the curl ~ water coiled all around ~ shorn of worry ~ no yesterday ~