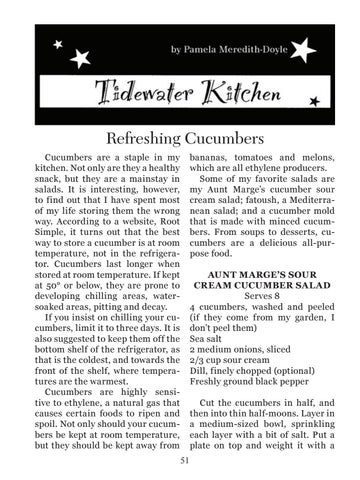 Refreshing Cucumbers bananas, tomatoes and melons, which are all ethylene producers. Some of my favorite salads are my Aunt Marge’s cucumber sour cream salad; fatoush, a Mediterranean salad; and a cucumber mold that is made with minced cucumbers. From soups to desserts, cucumbers are a delicious all-purpose food.

Cucumbers are a staple in my kitchen. Not only are they a healthy snack, but they are a mainstay in salads. It is interesting, however, to find out that I have spent most of my life storing them the wrong way. According to a website, Root Simple, it turns out that the best way to store a cucumber is at room temperature, not in the refrigerator. Cucumbers last longer when stored at room temperature. If kept at 50° or below, they are prone to developing chilling areas, watersoaked areas, pitting and decay. If you insist on chilling your cucumbers, limit it to three days. It is also suggested to keep them off the bottom shelf of the refrigerator, as that is the coldest, and towards the front of the shelf, where temperatures are the warmest. Cucumbers are highly sensitive to ethylene, a natural gas that causes certain foods to ripen and spoil. Not only should your cucumbers be kept at room temperature, but they should be kept away from

AUNT MARGE’S SOUR CREAM CUCUMBER SALAD Serves 8 4 cucumbers, washed and peeled (if they come from my garden, I don’t peel them) Sea salt 2 medium onions, sliced 2/3 cup sour cream Dill, finely chopped (optional) Freshly ground black pepper Cut the cucumbers in half, and then into thin half-moons. Layer in a medium-sized bowl, sprinkling each layer with a bit of salt. Put a plate on top and weight it with a 51