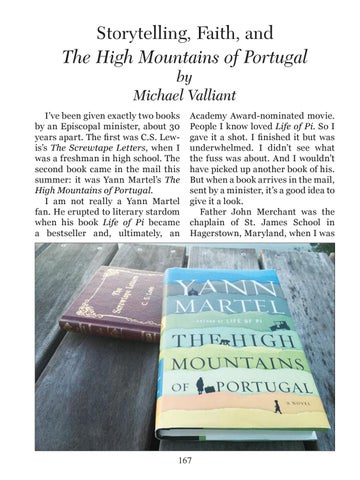 Storytelling, Faith, and The High Mountains of Portugal by Michael Valliant

I’ve been given exactly two books by an Episcopal minister, about 30 years apart. The first was C.S. Lewis’s The Screwtape Letters, when I was a freshman in high school. The second book came in the mail this summer: it was Yann Martel’s The High Mountains of Portugal. I am not really a Yann Martel fan. He erupted to literary stardom when his book Life of Pi became a bestseller and, ultimately, an

Academy Award-nominated movie. People I know loved Life of Pi. So I gave it a shot. I finished it but was underwhelmed. I didn’t see what the fuss was about. And I wouldn’t have picked up another book of his. But when a book arrives in the mail, sent by a minister, it’s a good idea to give it a look. Father John Merchant was the chaplain of St. James School in Hagerstown, Maryland, when I was