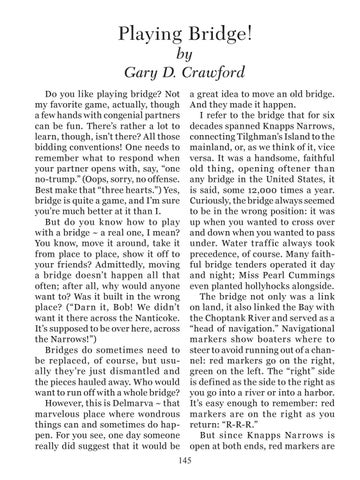 Do you like playing bridge? Not my favorite game, actually, though a few hands with congenial partners can be fun. There’s rather a lot to learn, though, isn’t there? All those bidding conventions! One needs to remember what to respond when your partner opens with, say, “one no-trump.” (Oops, sorry, no offense. Best make that “three hearts.”) Yes, bridge is quite a game, and I’m sure you’re much better at it than I. But do you k now how to play with a bridge ~ a real one, I mean? You know, move it around, take it from place to place, show it off to your friends? Admittedly, moving a bridge doesn’t happen all that often; after all, why would anyone want to? Was it built in the wrong place? (“Darn it, Bob! We didn’t want it there across the Nanticoke. It’s supposed to be over here, across the Narrows!”) Bridges do sometimes need to be replaced, of course, but usually they’re just dismantled and the pieces hauled away. Who would want to run off with a whole bridge? However, this is Delmarva ~ that marvelous place where wondrous things can and sometimes do happen. For you see, one day someone really did suggest that it would be

a great idea to move an old bridge. And they made it happen. I refer to the bridge that for six decades spanned Knapps Narrows, connecting Tilghman’s Island to the mainland, or, as we think of it, vice versa. It was a handsome, faithful old thing, opening of tener than any bridge in the United States, it is said, some 12,000 times a year. Curiously, the bridge always seemed to be in the wrong position: it was up when you wanted to cross over and down when you wanted to pass under. Water traffic always took precedence, of course. Many faithful bridge tenders operated it day and night; Miss Pearl Cummings even planted hollyhocks alongside. The bridge not only was a link on land, it also linked the Bay with the Choptank River and served as a “head of navigation.” Navigational markers show boaters where to steer to avoid running out of a channel: red markers go on the right, green on the left. The “right” side is defined as the side to the right as you go into a river or into a harbor. It’s easy enough to remember: red markers are on the right as you return: “R-R-R.” But since K napps Nar rows is open at both ends, red markers are