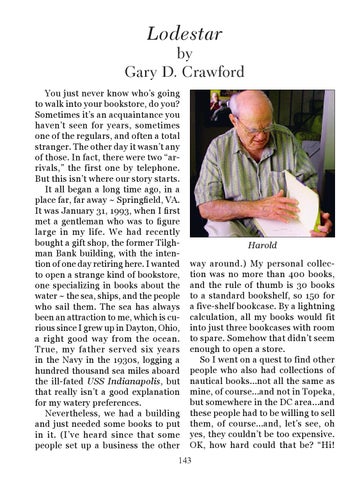 by Gary D. Crawford You just never know who’s going to walk into your bookstore, do you? Sometimes it’s an acquaintance you haven’t seen for years, sometimes one of the regulars, and often a total stranger. The other day it wasn’t any of those. In fact, there were two “arrivals,” the first one by telephone. But this isn’t where our story starts. It all began a long time ago, in a place far, far away ~ Springfield, VA. It was January 31, 1993, when I first met a gentleman who was to figure large in my life. We had recently bought a gift shop, the former Tilghman Bank building, with the intention of one day retiring here. I wanted to open a strange kind of bookstore, one specializing in books about the water ~ the sea, ships, and the people who sail them. The sea has always been an attraction to me, which is curious since I grew up in Dayton, Ohio, a right good way from the ocean. True, my father served six years in the Navy in the 1930s, logging a hundred thousand sea miles aboard the ill-fated USS Indianapolis, but that really isn’t a good explanation for my watery preferences. Nevertheless, we had a building and just needed some books to put in it. (I’ve heard since that some people set up a business the other

Harold way around.) My personal collection was no more than 400 books, and the rule of thumb is 30 books to a standard bookshelf, so 150 for a five-shelf bookcase. By a lightning calculation, all my books would fit into just three bookcases with room to spare. Somehow that didn’t seem enough to open a store. So I went on a quest to find other people who also had collections of nautical books…not all the same as mine, of course…and not in Topeka, but somewhere in the DC area…and these people had to be willing to sell them, of course…and, let’s see, oh yes, they couldn’t be too expensive. OK, how hard could that be? “Hi!