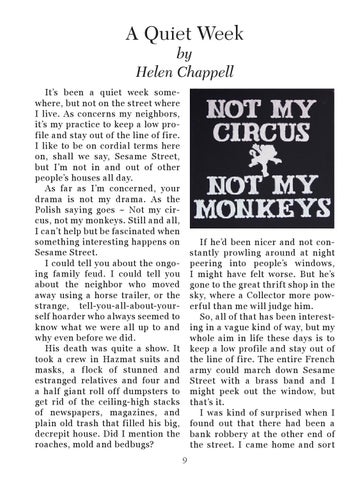 A Quiet Week by Helen Chappell

It’s been a quiet week somewhere, but not on the street where I live. As concerns my neighbors, it’s my practice to keep a low profile and stay out of the line of fire. I like to be on cordial terms here on, shall we say, Sesame Street, but I’m not in and out of other people’s houses all day. As far as I’m concerned, your drama is not my drama. As the Polish saying goes ~ Not my circus, not my monkeys. Still and all, I can’t help but be fascinated when something interesting happens on Sesame Street. I could tell you about the ongoing family feud. I could tell you about the neighbor who moved away using a horse trailer, or the strange, tell-you-all-about-yourself hoarder who always seemed to know what we were all up to and why even before we did. His death was quite a show. It took a crew in Hazmat suits and masks, a f lock of stunned and estranged relatives and four and a half giant roll off dumpsters to get rid of the ceiling-high stacks of newspapers, magazines, and plain old trash that filled his big, decrepit house. Did I mention the roaches, mold and bedbugs?

If he’d been nicer and not constantly prowling around at night peering into people’s windows, I might have felt worse. But he’s gone to the great thrift shop in the sky, where a Collector more powerful than me will judge him. So, all of that has been interesting in a vague kind of way, but my whole aim in life these days is to keep a low profile and stay out of the line of fire. The entire French army could march down Sesame Street with a brass band and I might peek out the window, but that’s it. I was kind of surprised when I found out that there had been a bank robbery at the other end of the street. I came home and sort 9