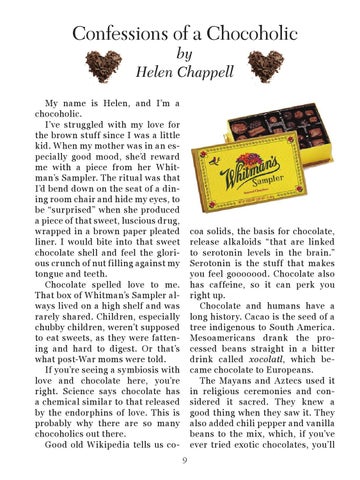 Confessions of a Chocoholic by Helen Chappell

My name is Helen, and I’m a chocoholic. I’ve struggled with my love for the brown stuff since I was a little kid. When my mother was in an especially good mood, she’d reward me with a piece from her Whitman’s Sampler. The ritual was that I’d bend down on the seat of a dining room chair and hide my eyes, to be “surprised” when she produced a piece of that sweet, luscious drug, wrapped in a brown paper pleated liner. I would bite into that sweet chocolate shell and feel the glorious crunch of nut filling against my tongue and teeth. Chocolate spelled love to me. That box of Whitman’s Sampler always lived on a high shelf and was rarely shared. Children, especially chubby children, weren’t supposed to eat sweets, as they were fattening and hard to digest. Or that’s what post-War moms were told. If you’re seeing a symbiosis with love and chocolate here, you’re right. Science says chocolate has a chemical similar to that released by the endorphins of love. This is probably why there are so many chocoholics out there. Good old Wikipedia tells us co-

coa solids, the basis for chocolate, release alkaloids “that are linked to serotonin levels in the brain.” Serotonin is the stuff that makes you feel gooooood. Chocolate also has caffeine, so it can perk you right up. Chocolate and humans have a long history. Cacao is the seed of a tree indigenous to South America. Mesoamericans drank the processed beans straight in a bitter drink called xocolatl, which became chocolate to Europeans. The Mayans and Aztecs used it in religious ceremonies and considered it sacred. They knew a good thing when they saw it. They also added chili pepper and vanilla beans to the mix, which, if you’ve ever tried exotic chocolates, you’ll 9