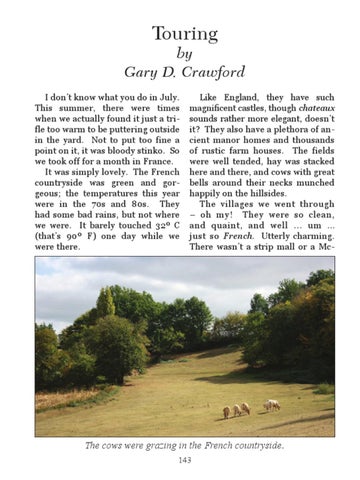 by Gary D. Crawford I don’t know what you do in July. This summer, there were times when we actually found it just a trifle too warm to be puttering outside in the yard. Not to put too fine a point on it, it was bloody stinko. So we took off for a month in France. It was simply lovely. The French countryside was green and gorgeous; the temperatures this year were in the 70s and 80s. They had some bad rains, but not where we were. It barely touched 32º C (that’s 90º F) one day while we were there.

Like England, they have such magnificent castles, though chateaux sounds rather more elegant, doesn’t it? They also have a plethora of ancient manor homes and thousands of rustic farm houses. The fields were well tended, hay was stacked here and there, and cows with great bells around their necks munched happily on the hillsides. The villages we went through – oh my! They were so clean, and quaint, and well ... um … just so French. Utterly charming. There wasn’t a strip mall or a Mc-

The cows were grazing in the French countryside. 143