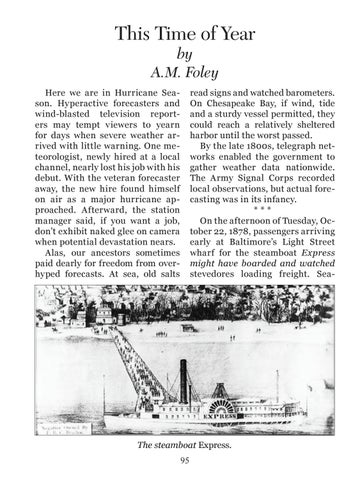 This Time of Year by A.M. Foley

Here we are in Hurricane Season. Hyperactive forecasters and wind-blasted television reporters may tempt viewers to yearn for days when severe weather arrived with little warning. One meteorologist, newly hired at a local channel, nearly lost his job with his debut. With the veteran forecaster away, the new hire found himself on air as a major hurricane approached. Afterward, the station manager said, if you want a job, donâ&amp;#x20AC;&amp;#x2122;t exhibit naked glee on camera when potential devastation nears. Alas, our ancestors sometimes paid dearly for freedom from overhyped forecasts. At sea, old salts

read signs and watched barometers. On Chesapeake Bay, if wind, tide and a sturdy vessel permitted, they could reach a relatively sheltered harbor until the worst passed. By the late 1800s, telegraph networks enabled the government to gather weather data nationwide. The Army Signal Corps recorded local observations, but actual forecasting was in its infancy. *** On the afternoon of Tuesday, October 22, 1878, passengers arriving early at Baltimoreâ&amp;#x20AC;&amp;#x2122;s Light Street wharf for the steamboat Express might have boarded and watched stevedores loading freight. Sea-