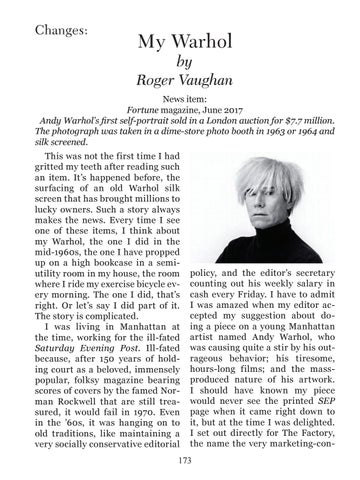 by Roger Vaughan News item: Fortune magazine, June 2017 Andy Warhol’s first self-portrait sold in a London auction for $7.7 million. The photograph was taken in a dime-store photo booth in 1963 or 1964 and silk screened. This was not the first time I had gritted my teeth after reading such an item. It’s happened before, the surfacing of an old Warhol silk screen that has brought millions to lucky owners. Such a story always makes the news. Every time I see one of these items, I think about my Warhol, the one I did in the mid-1960s, the one I have propped up on a high bookcase in a semiutility room in my house, the room where I ride my exercise bicycle every morning. The one I did, that’s right. Or let’s say I did part of it. The story is complicated. I was living in Manhattan at the time, working for the ill-fated Saturday Evening Post. Ill-fated because, after 150 years of holding court as a beloved, immensely popular, folksy magazine bearing scores of covers by the famed Norman Rockwell that are still treasured, it would fail in 1970. Even in the ’60s, it was hanging on to old traditions, like maintaining a very socially conservative editorial

policy, and the editor’s secretary counting out his weekly salary in cash every Friday. I have to admit I was amazed when my editor accepted my suggestion about doing a piece on a young Manhattan artist named Andy Warhol, who was causing quite a stir by his outrageous behavior; his tiresome, hours-long films; and the massproduced nature of his artwork. I should have known my piece would never see the printed SEP page when it came right down to it, but at the time I was delighted. I set out directly for The Factory, the name the very marketing-con-