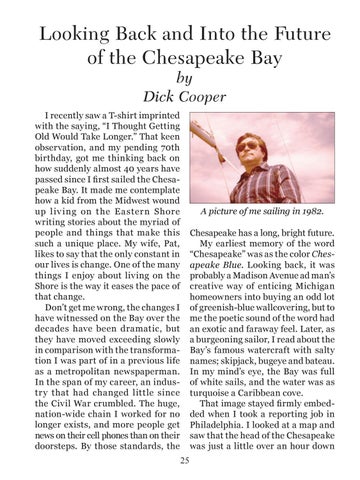 I recently saw a T-shirt imprinted with the saying, “I Thought Getting Old Would Take Longer.” That keen observation, and my pending 70th birthday, got me thinking back on how suddenly almost 40 years have passed since I first sailed the Chesapeake Bay. It made me contemplate how a kid from the Midwest wound up liv ing on t he Easter n Shore writing stories about the myriad of people and things that make this such a unique place. My wife, Pat, likes to say that the only constant in our lives is change. One of the many things I enjoy about living on the Shore is the way it eases the pace of that change. Don’t get me wrong, the changes I have witnessed on the Bay over the decades have been dramatic, but they have moved exceeding slowly in comparison with the transformation I was part of in a previous life as a metropolitan newspaperman. In the span of my career, an industry that had changed little since the Civil War crumbled. The huge, nation-wide chain I worked for no longer exists, and more people get news on their cell phones than on their doorsteps. By those standards, the

A picture of me sailing in 1982. Chesapeake has a long, bright future. My earliest memory of the word “Chesapeake” was as the color Chesapeake Blue. Looking back, it was probably a Madison Avenue ad man’s creative way of enticing Michigan homeowners into buying an odd lot of greenish-blue wallcovering, but to me the poetic sound of the word had an exotic and faraway feel. Later, as a burgeoning sailor, I read about the Bay’s famous watercraft with salty names; skipjack, bugeye and bateau. In my mind’s eye, the Bay was full of white sails, and the water was as turquoise a Caribbean cove. That image stayed firmly embedded when I took a reporting job in Philadelphia. I looked at a map and saw that the head of the Chesapeake was just a little over an hour down 25