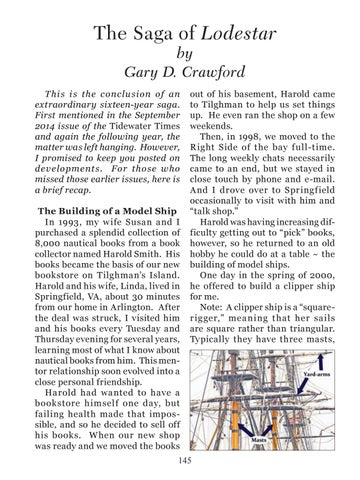 The Saga of Lodestar by Gary D. Crawford

Thi s i s the c onclu s ion of an extraordinary sixteen-year saga. First mentioned in the September 2014 issue of the Tidewater Times and again the following year, the matter was left hanging. However, I promised to keep you posted on de velopme nt s. For thos e who missed those earlier issues, here is a brief recap. The Building of a Model Ship In 1993, my w ife Susan and I purchased a splendid collection of 8,000 nautical books from a book collector named Harold Smith. His books became the basis of our new bookstore on Tilghman’s Island. Harold and his wife, Linda, lived in Springfield, VA, about 30 minutes from our home in Arlington. After the deal was struck, I visited him and his books every Tuesday and Thursday evening for several years, learning most of what I know about nautical books from him. This mentor relationship soon evolved into a close personal friendship. Harold had wanted to have a book store himself one day, but failing health made that impossible, and so he decided to sell off his books. When our new shop was ready and we moved the books

out of his basement, Harold came to Tilghman to help us set things up. He even ran the shop on a few weekends. Then, in 1998, we moved to the R ight Side of the bay f ull-time. The long weekly chats necessarily came to an end, but we stayed in close touch by phone and e-mail. A nd I drove over to Springf ield occasionally to visit with him and “talk shop.” Harold was having increasing difficulty getting out to “pick” books, however, so he returned to an old hobby he could do at a table ~ the building of model ships. One day in the spring of 2000, he offered to build a clipper ship for me. Note: A clipper ship is a “squarer ig ger,” mea ning t hat her sa i ls are square rather than triangular. Typically they have three masts,