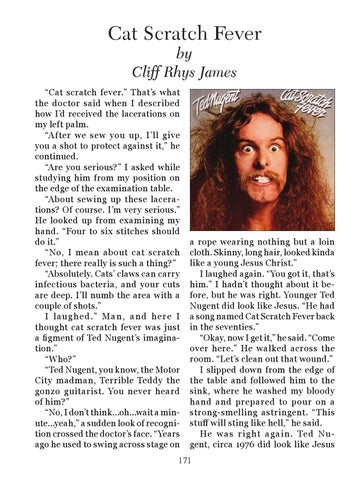 “Cat scratch fever.” That’s what the doctor said when I described how I’d received the lacerations on my left palm. “After we sew you up, I’ll give you a shot to protect against it,” he continued. “Are you serious?” I asked while studying him from my position on the edge of the examination table. “About sewing up these lacerations? Of course. I’m very serious.” He looked up from examining my hand. “Four to six stitches should do it.” “No, I mean about cat scratch fever; there really is such a thing?” “Absolutely. Cats’ claws can carry infectious bacteria, and your cuts are deep. I’ll numb the area with a couple of shots.” I laug he d.” Ma n, a nd here I thought cat scratch fever was just a figment of Ted Nugent’s imagination.” “Who?” “Ted Nugent, you know, the Motor City madman, Terrible Teddy the gonzo guitarist. You never heard of him?” “No, I don’t think…oh…wait a minute…yeah,” a sudden look of recognition crossed the doctor’s face. “Years ago he used to swing across stage on

a rope wearing nothing but a loin cloth. Skinny, long hair, looked kinda like a young Jesus Christ.” I laughed again. “You got it, that’s him.” I hadn’t thought about it before, but he was right. Younger Ted Nugent did look like Jesus. “He had a song named Cat Scratch Fever back in the seventies.” “Okay, now I get it,” he said. “Come over here.” He walked across the room. “Let’s clean out that wound.” I slipped down from the edge of the table and followed him to the sink, where he washed my bloody hand and prepared to pour on a strong-smelling astringent. “This stuff will sting like hell,” he said. He wa s r ig ht aga in. Ted Nugent, circa 1976 did look like Jesus