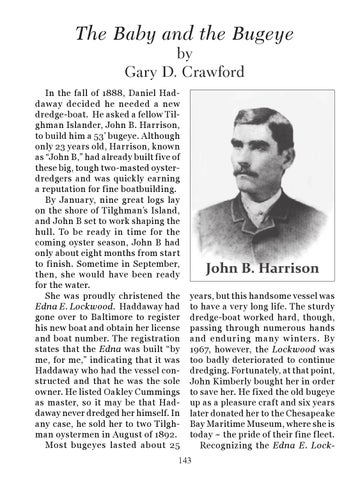 The Baby and the Bugeye by Gary D. Crawford

In the fall of 1888, Daniel Haddaway decided he needed a new dredge-boat. He asked a fellow Tilghman Islander, John B. Harrison, to build him a 53’ bugeye. Although only 23 years old, Harrison, known as “John B,” had already built five of these big, tough two-masted oysterdredgers and was quickly earning a reputation for fine boatbuilding. By January, nine great logs lay on the shore of Tilghman’s Island, and John B set to work shaping the hull. To be ready in time for the coming oyster season, John B had only about eight months from start to finish. Sometime in September, then, she would have been ready for the water. She was proudly christened the Edna E. Lockwood. Haddaway had gone over to Baltimore to register his new boat and obtain her license and boat number. The registration states that the Edna was built “by me, for me,” indicating that it was Haddaway who had the vessel constructed and that he was the sole owner. He listed Oakley Cummings as master, so it may be that Haddaway never dredged her himself. In any case, he sold her to two Tilghman oystermen in August of 1892. Most bugeyes lasted about 25

years, but this handsome vessel was to have a very long life. The sturdy dredge-boat worked hard, though, passing through numerous hands and enduring many w inters. By 1967, however, the Lockwood was too badly deteriorated to continue dredging. Fortunately, at that point, John Kimberly bought her in order to save her. He fixed the old bugeye up as a pleasure craft and six years later donated her to the Chesapeake Bay Maritime Museum, where she is today ~ the pride of their fine fleet. Recognizing the Edna E. Lock-