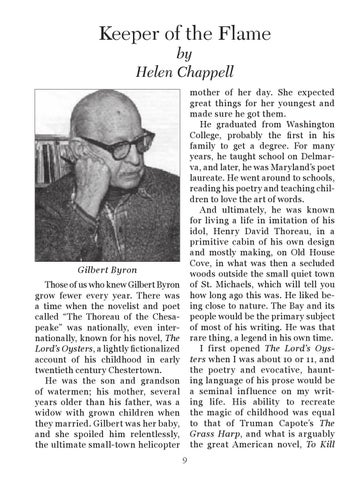 Keeper of the Flame by Helen Chappell

mother of her day. She expected great things for her youngest and made sure he got them. He graduated from Washington College, probably the first in his family to get a degree. For many years, he taught school on Delmarva, and later, he was Maryland’s poet laureate. He went around to schools, reading his poetry and teaching children to love the art of words. And ultimately, he was known for living a life in imitation of his idol, Henry David Thoreau, in a primitive cabin of his own design and mostly making, on Old House Cove, in what was then a secluded woods outside the small quiet town of St. Michaels, which will tell you how long ago this was. He liked being close to nature. The Bay and its people would be the primary subject of most of his writing. He was that rare thing, a legend in his own time. I first opened The Lord’s Oysters when I was about 10 or 11, and the poetry and evocative, haunting language of his prose would be a seminal influence on my writing life. His ability to recreate the magic of childhood was equal to that of Truman Capote’s The Grass Harp, and what is arguably the great American novel, To Kill

Gilbert Byron Those of us who knew Gilbert Byron grow fewer every year. There was a time when the novelist and poet called “The Thoreau of the Chesapeake” was nationally, even internationally, known for his novel, The Lord’s Oysters, a lightly fictionalized account of his childhood in early twentieth century Chestertown. He was the son and grandson of watermen; his mother, several years older than his father, was a widow with grown children when they married. Gilbert was her baby, and she spoiled him relentlessly, the ultimate small-town helicopter 9