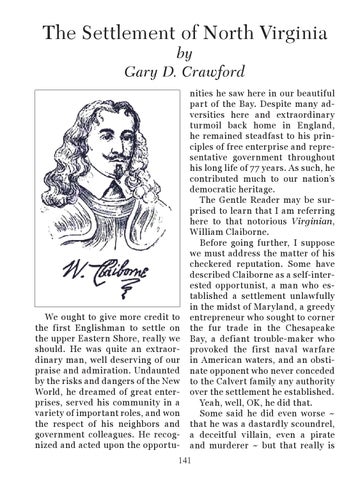 The Settlement of North Virginia by Gary D. Crawford

We ought to give more credit to the first Englishman to settle on the upper Eastern Shore, really we should. He was quite an extraordinary man, well deserving of our praise and admiration. Undaunted by the risks and dangers of the New World, he dreamed of great enterprises, served his community in a variety of important roles, and won the respect of his neighbors and government colleagues. He recognized and acted upon the opportu-

nities he saw here in our beautiful part of the Bay. Despite many adversities here and extraordinary turmoil back home in England, he remained steadfast to his principles of free enterprise and representative government throughout his long life of 77 years. As such, he contributed much to our nationâ&#x20AC;&#x2122;s democratic heritage. The Gentle Reader may be surprised to learn that I am referring here to that notorious Virginian, William Claiborne. Before going further, I suppose we must address the matter of his checkered reputation. Some have described Claiborne as a self-interested opportunist, a man who established a settlement unlawfully in the midst of Maryland, a greedy entrepreneur who sought to corner the fur trade in the Chesapeake Bay, a defiant trouble-maker who provoked the first naval warfare in American waters, and an obstinate opponent who never conceded to the Calvert family any authority over the settlement he established. Yeah, well, OK, he did that. Some said he did even worse ~ that he was a dastardly scoundrel, a deceitful villain, even a pirate and murderer ~ but that really is