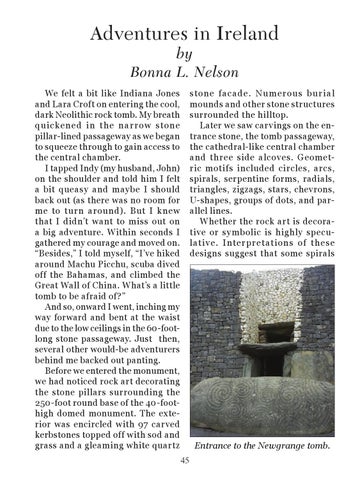 We felt a bit like Indiana Jones and Lara Croft on entering the cool, dark Neolithic rock tomb. My breath quickened i n t he na r row stone pillar-lined passageway as we began to squeeze through to gain access to the central chamber. I tapped Indy (my husband, John) on the shoulder and told him I felt a bit queasy and maybe I should back out (as there was no room for me to turn around). But I knew that I didn’t want to miss out on a big adventure. Within seconds I gathered my courage and moved on. “Besides,” I told myself, “I’ve hiked around Machu Picchu, scuba dived off the Bahamas, and climbed the Great Wall of China. What’s a little tomb to be afraid of?” And so, onward I went, inching my way forward and bent at the waist due to the low ceilings in the 60-footlong stone passageway. Just then, several other would-be adventurers behind me backed out panting. Before we entered the monument, we had noticed rock art decorating the stone pillars surrounding the 250-foot round base of the 40-foothigh domed monument. The exterior was encircled with 97 carved kerbstones topped off with sod and grass and a gleaming white quartz

Entrance to the Newgrange tomb. 45