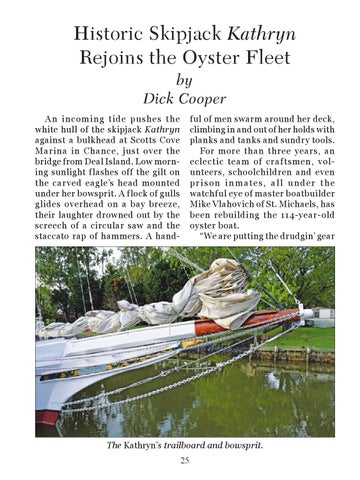 Historic Skipjack Kathryn Rejoins the Oyster Fleet by Dick Cooper A n incoming t ide pushes t he white hull of the skipjack Kathryn against a bulkhead at Scotts Cove Marina in Chance, just over the bridge from Deal Island. Low morning sunlight f lashes off the gilt on the carved eagle’s head mounted under her bowsprit. A f lock of gulls glides overhead on a bay breeze, their laughter drowned out by the screech of a circular saw and the staccato rap of hammers. A hand-

ful of men swarm around her deck, climbing in and out of her holds with planks and tanks and sundry tools. For more than three years, an eclectic team of craf tsmen, volunteers, schoolchildren and even pr i s on i n m at e s , a l l u nd e r t he watchful eye of master boatbuilder Mike Vlahovich of St. Michaels, has been rebuilding the 114-year-old oyster boat. “We are putting the drudgin’ gear

The Kathryn’s trailboard and bowsprit. 25