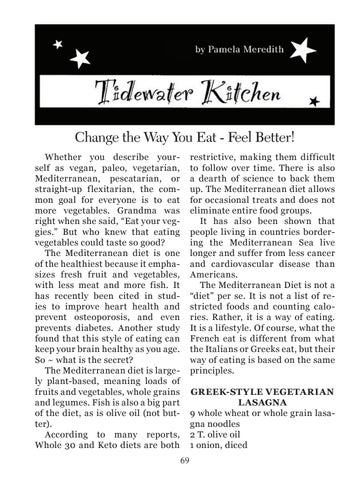 Change the Way You Eat - Feel Better! restrictive, making them difficult to follow over time. There is also a dearth of science to back them up. The Mediterranean diet allows for occasional treats and does not eliminate entire food groups. It has also been shown that people living in countries bordering the Mediterranean Sea live longer and suffer from less cancer and cardiovascular disease than Americans. The Mediterranean Diet is not a “diet” per se. It is not a list of restricted foods and counting calories. Rather, it is a way of eating. It is a lifestyle. Of course, what the French eat is different from what the Italians or Greeks eat, but their way of eating is based on the same principles.

Whether you describe yourself as vegan, paleo, vegetarian, Mediterranean, pescatarian, or straight-up f lexitarian, the common goal for everyone is to eat more vegetables. Grandma was right when she said, “Eat your veggies.” But who knew that eating vegetables could taste so good? The Mediterranean diet is one of the healthiest because it emphasizes fresh fruit and vegetables, with less meat and more fish. It has recently been cited in studies to improve heart health and prevent osteoporosis, and even prevents diabetes. Another study found that this style of eating can keep your brain healthy as you age. So ~ what is the secret? The Mediterranean diet is largely plant-based, meaning loads of fruits and vegetables, whole grains and legumes. Fish is also a big part of the diet, as is olive oil (not butter). According to many reports, Whole 30 and Keto diets are both