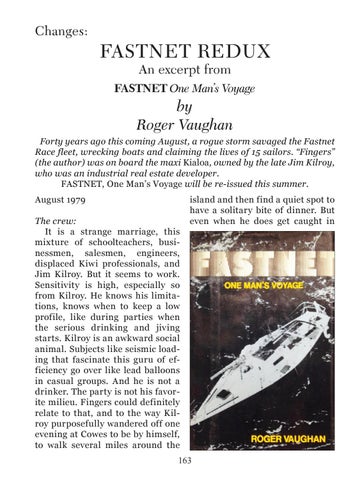 FASTNET REDUX An excerpt from

by Roger Vaughan Forty years ago this coming August, a rogue storm savaged the Fastnet Race fleet, wrecking boats and claiming the lives of 15 sailors. “Fingers” (the author) was on board the maxi Kialoa, owned by the late Jim Kilroy, who was an industrial real estate developer. FASTNET, One Man’s Voyage will be re-issued this summer. August 1979 The crew: It is a strange marriage, this mixture of schoolteachers, businessmen, salesmen, engineers, displaced Kiwi professionals, and Jim Kilroy. But it seems to work. Sensitivity is high, especially so from Kilroy. He knows his limitations, knows when to keep a low profile, like during parties when the serious drinking and jiving starts. Kilroy is an awkward social animal. Subjects like seismic loading that fascinate this guru of efficiency go over like lead balloons in casual groups. And he is not a drinker. The party is not his favorite milieu. Fingers could definitely relate to that, and to the way Kilroy purposefully wandered off one evening at Cowes to be by himself, to walk several miles around the

island and then find a quiet spot to have a solitary bite of dinner. But even when he does get caught in