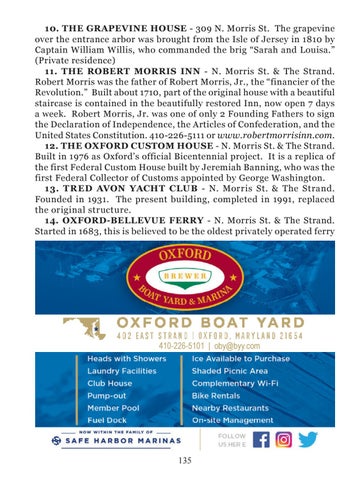 10. THE GRAPEVINE HOUSE - 309 N. Morris St. The grapevine over the entrance arbor was brought from the Isle of Jersey in 1810 by Captain William Willis, who commanded the brig “Sarah and Louisa.” (Private residence) 11. THE ROBERT MORRIS INN - N. Morris St. & The Strand. Robert Morris was the father of Robert Morris, Jr., the “financier of the Revolution.” Built about 1710, part of the original house with a beautiful staircase is contained in the beautifully restored Inn, now open 7 days a week. Robert Morris, Jr. was one of only 2 Founding Fathers to sign the Declaration of Independence, the Articles of Confederation, and the United States Constitution. 410-226-5111 or www.robertmorrisinn.com. 12. THE OXFORD CUSTOM HOUSE - N. Morris St. & The Strand. Built in 1976 as Oxford’s official Bicentennial project. It is a replica of the first Federal Custom House built by Jeremiah Banning, who was the first Federal Collector of Customs appointed by George Washington. 13. TRED AVON YACHT CLUB - N. Morris St. & The Strand. Founded in 1931. The present building, completed in 1991, replaced the original structure. 14. OXFORD-BELLEVUE FERRY - N. Morris St. & The Strand. Started in 1683, this is believed to be the oldest privately operated ferry