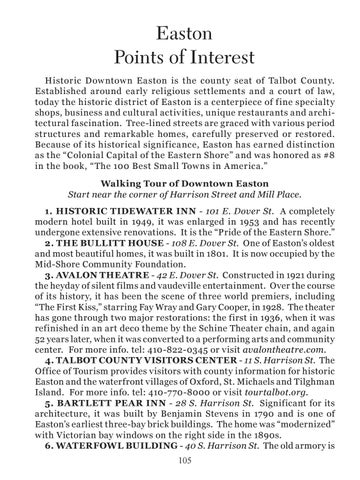 Easton Points of Interest Historic Downtown Easton is the county seat of Talbot County. Established around early religious settlements and a court of law, today the historic district of Easton is a centerpiece of fine specialty shops, business and cultural activities, unique restaurants and architectural fascination. Tree-lined streets are graced with various period structures and remarkable homes, carefully preserved or restored. Because of its historical significance, Easton has earned distinction as the “Colonial Capital of the Eastern Shore” and was honored as #8 in the book, “The 100 Best Small Towns in America.” Walking Tour of Downtown Easton Start near the corner of Harrison Street and Mill Place. 1. HISTORIC TIDEWATER INN - 101 E. Dover St. A completely modern hotel built in 1949, it was enlarged in 1953 and has recently undergone extensive renovations. It is the “Pride of the Eastern Shore.” 2. THE BULLITT HOUSE - 108 E. Dover St. One of Easton’s oldest and most beautiful homes, it was built in 1801. It is now occupied by the Mid-Shore Community Foundation. 3. AVALON THEATRE - 42 E. Dover St. Constructed in 1921 during the heyday of silent films and vaudeville entertainment. Over the course of its history, it has been the scene of three world premiers, including “The First Kiss,” starring Fay Wray and Gary Cooper, in 1928. The theater has gone through two major restorations: the first in 1936, when it was refinished in an art deco theme by the Schine Theater chain, and again 52 years later, when it was converted to a performing arts and community center. For more info. tel: 410-822-0345 or visit avalontheatre.com. 4. TALBOT COUNTY VISITORS CENTER - 11 S. Harrison St. The Office of Tourism provides visitors with county information for historic Easton and the waterfront villages of Oxford, St. Michaels and Tilghman Island. For more info. tel: 410-770-8000 or visit tourtalbot.org. 5. BARTLETT PEAR INN - 28 S. Harrison St. Significant for its architecture, it was built by Benjamin Stevens in 1790 and is one of Easton’s earliest three-bay brick buildings. The home was “modernized” with Victorian bay windows on the right side in the 1890s. 6. WATERFOWL BUILDING - 40 S. Harrison St. The old armory is 105