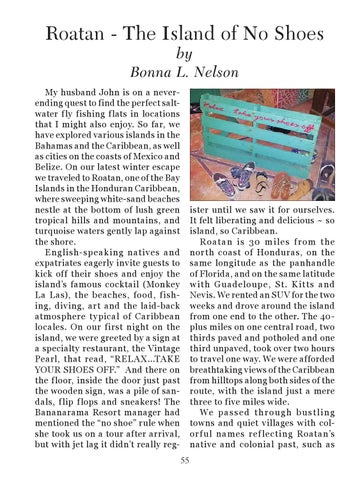 Roatan - The Island of No Shoes by Bonna L. Nelson

My husband John is on a neverending quest to find the perfect saltwater f ly fishing f lats in locations that I might also enjoy. So far, we have explored various islands in the Bahamas and the Caribbean, as well as cities on the coasts of Mexico and Belize. On our latest winter escape we traveled to Roatan, one of the Bay Islands in the Honduran Caribbean, where sweeping white-sand beaches nestle at the bottom of lush green tropical hills and mountains, and turquoise waters gently lap against the shore. English-speaking natives and expatriates eagerly invite guests to kick off their shoes and enjoy the island’s famous cocktail (Monkey La Las), the beaches, food, fishing, diving, art and the laid-back atmosphere typical of Caribbean locales. On our first night on the island, we were greeted by a sign at a specialty restaurant, the Vintage Pearl, that read, “RELAX…TAKE YOUR SHOES OFF.” And there on the f loor, inside the door just past the wooden sign, was a pile of sandals, f lip f lops and sneakers! The Bananarama Resort manager had mentioned the “no shoe” rule when she took us on a tour after arrival, but with jet lag it didn’t really reg-

ister until we saw it for ourselves. It felt liberating and delicious ~ so island, so Caribbean. Roat a n i s 30 m i le s f rom t he north coast of Honduras, on the same longitude as the panhandle of Florida, and on the same latitude w it h Guadeloupe, St. K it ts and Nevis. We rented an SUV for the two weeks and drove around the island from one end to the other. The 40plus miles on one central road, two thirds paved and potholed and one third unpaved, took over two hours to travel one way. We were afforded breathtaking views of the Caribbean from hilltops along both sides of the route, with the island just a mere three to five miles wide. We pa s s e d t h r oug h bu s t l i ng towns and quiet villages with color ful names ref lecting Roatan’s native and colonial past, such as 55