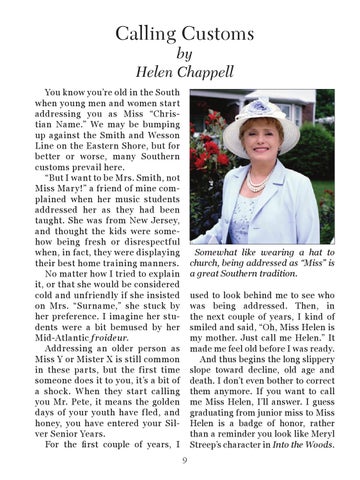 You know you’re old in the South when young men and women start addressing you as Miss “Christian Name.” We may be bumping up against the Smith and Wesson Line on the Eastern Shore, but for better or worse, many Southern customs prevail here. “But I want to be Mrs. Smith, not Miss Mary!” a friend of mine complained when her music students addressed her as they had been taught. She was from New Jersey, and thought the kids were somehow being fresh or disrespectful when, in fact, they were displaying their best home training manners. No matter how I tried to explain it, or that she would be considered cold and unfriendly if she insisted on Mrs. “Surname,” she stuck by her preference. I imagine her students were a bit bemused by her Mid-Atlantic froideur. Addressing an older person as Miss Y or Mister X is still common in these parts, but the first time someone does it to you, it’s a bit of a shock. When they start calling you Mr. Pete, it means the golden days of your youth have f led, and honey, you have entered your Silver Senior Years. For the first couple of years, I

Somewhat like wearing a hat to church, being addressed as “Miss” is a great Southern tradition. used to look behind me to see who was being addressed. Then, in the next couple of years, I kind of smiled and said, “Oh, Miss Helen is my mother. Just call me Helen.” It made me feel old before I was ready. And thus begins the long slippery slope toward decline, old age and death. I don’t even bother to correct them anymore. If you want to call me Miss Helen, I’ll answer. I guess graduating from junior miss to Miss Helen is a badge of honor, rather than a reminder you look like Meryl Streep’s character in Into the Woods. 9