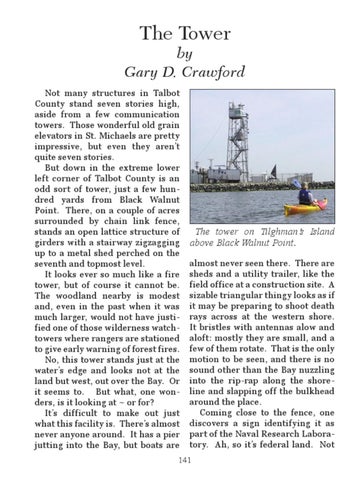 by Gary D. Crawford Not many structures in Talbot County stand seven stories high, aside from a few communication towers. Those wonderful old grain elevators in St. Michaels are pretty impressive, but even they aren’t quite seven stories. But down in the extreme lower left corner of Talbot County is an odd sort of tower, just a few hundred yards from Black Walnut Point. There, on a couple of acres surrounded by chain link fence, stands an open lattice structure of girders with a stairway zigzagging up to a metal shed perched on the seventh and topmost level. It looks ever so much like a fire tower, but of course it cannot be. The woodland nearby is modest and, even in the past when it was much larger, would not have justified one of those wilderness watchtowers where rangers are stationed to give early warning of forest fires. No, this tower stands just at the water’s edge and looks not at the land but west, out over the Bay. Or it seems to. But what, one wonders, is it looking at ~ or for? It’s difficult to make out just what this facility is. There’s almost never anyone around. It has a pier jutting into the Bay, but boats are

The tower on Tilghman’s Island above Black Walnut Point. almost never seen there. There are sheds and a utility trailer, like the field office at a construction site. A sizable triangular thingy looks as if it may be preparing to shoot death rays across at the western shore. It bristles with antennas alow and aloft: mostly they are small, and a few of them rotate. That is the only motion to be seen, and there is no sound other than the Bay nuzzling into the rip-rap along the shoreline and slapping off the bulkhead around the place. Coming close to the fence, one discovers a sign identifying it as part of the Naval Research Laboratory. Ah, so it’s federal land. Not